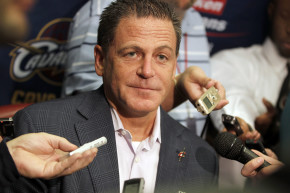 Dan Gilbert Cons Cleveland Out Of $70 Million
By Robert Silverman

In the end, Cleveland caved. A mere week ago, it seemed like Dan Gilbert, the Cleveland Cavaliers’ owner and subprime mortgage peddler might have self-sabotaged his best chance to nab millions of public dollars and build his own retail fiefdom at Quicken Loans Arena, featuring shiny new walls made of glass.

Instead of getting on the blower and trying to strong-arm the local pols, Gilbert presented the Cleveland City Council with an offer they absolutely could and should have refused. Per the Cleveland Plain Dealer, here’s what Gilbert gave in return for $70 million from both the city of Cleveland and Cuyahoga County:

The Cavaliers have pledged that the portion of the admission tax that goes to the city’s general fund will never fall below the portion directed toward debt service on the upgrades. If that happens, the Cavaliers will write the city a check for the difference.

The Cavaliers have agreed to refurbish the basketball floors in city recreation centers, more than 20 in total. After the announcement the city confirmed that the Cavs will also refurbish high school basketball courts in Cleveland public high schools, as well.

Additionally, the Cavaliers announced it will donate all admissions revenues from its road-game watch parties at The Q during the NBA playoffs to benefit Habitat for Humanity. Over the last two seasons, those watch parties have raised more than $1 million from admissions that was donated to several charities.

Those seem like nice things! But they are not! As Cleveland Scene notes, hammering out the exact amount of taxes that are directed to the general fund versus debt repayments only codifies the way those funds are currently disbursed. So Cleveland gets essentially zip.

Second, spiffying up basketball courts is a swell P.R. move, but since they haven’t spelled out exactly what “refurbish” entails, it could mean anything from completely rebuilt venues to a new coat of polyurethane and some nets. Again, we’re talking about a $140 million project that will end up costing close to $250 million by the time it’s paid off in 2034—assuming there’s relatively little economic upheaval between now and then—and Dan Gilbert’s net worth is estimated to be $5.8 billion, according to Forbes.

And three, the Cavs were already donating box office revenue generated by playoff watch parties to charity. Habitat for Humanity is a great choice, charitable-giving wise, but all they’ve done is specify which organization will be the recipient of their generosity, and now a slew of groups advocating for the victims of domestic violence, assisting with child care services, and the Special Olympics will go wanting.

Yet, this was more than enough for one city councilperson to vote yes and another to abstain, giving Gilbert the 12-5 supermajority he so desperately needed. A public referendum could still be placed on the ballot, but given Mayor Frank G. Jackson’s very public backing, State Senator Sandra Williams’ bilious proclamation that, “Anyone against economic growth is foolish and unwise,” and Congresswoman Marcia Fudge, who similarly crowed, “The facts about what The Q means for all Cleveland residents are irrefutable,” all of whom are Democrats, the odds are against it.

For Greater Cleveland Congregations, the nondenominational community organization that was previously asking that Gilbert commit $35 million towards a community fund, any leverage they might have had is now gone, as is their demand that Cleveland match the millions spent to renovate the Q with allocations towards, you know, things that will actual benefit Clevelanders.

In an unrelated story, in the initial version of the lease agreement between the soon-to-be Las Vegas Raiders and their new hometown, owner Mark Davis asked to pay one dollar a year in rent. In the latest draft, unveiled on Monday, the team negotiated down to zero, all of which makes perfect financial sense, according to the stadium authority chair.

“It’s based on the fact that the Raiders are going to be investing up to $1.15 billion and certainly taking the risk for any overruns,” he said.