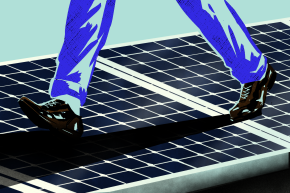 This summer will see the planned opening of a solar-powered sidewalk on the campus of Thompson Rivers University in British Columbia. The 1,200-foot array should be able to generate about 15,000 kilowatt-hours a year — enough to power one and a half average American houses — even as students walk all over it.

In an interview with the Vancouver Sun, Thompson Rivers professor Michael Mehta said a major goal of the project is to get people to rethink where solar energy can be gathered. The very fact solar power plants are sometimes called solar farms points to the problem: Many such projects are in rural areas that could otherwise be used for agriculture. Mehta and his colleagues on the Solar Compass Project want urban environments to be put to work gathering solar energy, instead.

Building a high-tech sidewalk can potentially do more than just take in the sun’s energy, according to Mehta. He said the panels could also carry fiber-optic signals or be used to display messages and reroute travelers in response to changing conditions. But the main goal for now will be proving the sidewalks can successfully take in power. Mehta told the paper that the 64-panel array should produce enough power to keep 40 computers running eight hours a day for an entire year.

This isn’t the first experiment with road surfaces capable of harvesting the sun’s energy. A nearly 250-foot bike path called SolaRoad opened in the Netherlands in 2014, while the American company Solar Roadways has hugely ambitious plans to make American roads solar-friendly. But that would require materials capable of gathering solar energy while standing up to the wear and tear of passing vehicles, and no such material exists yet.

The Thompson Rivers project faces a far less challenging task, as the sidewalks only have to be able to withstand foot traffic and the occasional bicycle. Mehta said the solar surface could theoretically support a fire truck, though there are no immediate plans to put the sidewalks to that particular test.