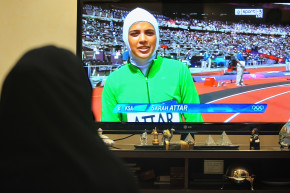 One of the world's most sexist nations drives the point home

The Saudi Arabian advisory Shura Council rejected a measure that would have founded sports education colleges for women in the kingdom, a blow to the advancement of equal opportunity in a country where girls are already denied physical education programs in state-run schools because female exercise is seen by some ultraconservative clerics as “immodest.” One scholar has called such activity “steps of the devil.”

One of the proposal’s co-sponsors, Lateefa Al-Shaalan, told the Saudi Gazette, “This was the most frustrating day for the Saudi women.”

That this news drops less than a week after Saudi Arabia was somehow elected to the United Nations’ Commission on the Status of Women—a group charged with promoting equality and empowerment of women—makes the UN selection even more farcical than it already was. The monitoring NGO, UN Watch, condemned that move, labeling Saudi Arabia “the world’s most misogynistic regime.” Its executive director, Hillel Neuer, said in an interview with France24 that the Saudi kingdom was the “world’s worst violator of women’s rights in the world” and this move was a “black day for women’s rights.”

Electing Saudi Arabia to protect women’s rights is like making an arsonist into the town fire chief.https://t.co/Q0HASTQwfJ

Amazingly, Saudi Arabia joined Iran, of all countries, on that UN women’s commission. Those two nations, a Middle Eastern scholar noted in the Huffington Post, are the only two that prohibit women from even attending men’s sporting events.

There have been only the smallest, incremental improvements for Saudi women in the sporting realm. In February, the government began issuing licenses for women’s-only gyms, which previously had to be operated under the shroud of a salon or spa. Still, these gyms are for fitness only as competitive sports remain barred in a country with a high obese rate, particularly among women.

While Saudi Arabia did send its first two female athletes to the Olympics in 2012 (and four more in 2016) and there are growing private sports companies like Jeddah United offering youth sports to girls as well as boys, those changes are happening slowly. The Human Rights Watch in 2012 described privately-run competitive sports for women and girls in Saudi Arabia to be “tolerated rather than supported by the government.”

“There are now clubs for women and several kinds of sports are being exercised there, but it is usually in a timid way,” sports critic Madani Rahimi told GulfNews.com. “It is about time such clubs emerged in the open and got official support from the state.”

“We really deplore the absence in our society of a culture that promotes sports as a crucially stabilizing factor in women’s lives,” a college student named Rotana told the news site. “Many families see sports as a luxury that they do not need, while several other families consider it as an alien phenomenon that can lead only to trouble. We do need to change the way families look at sports for women and help them appreciate its role in building characters and giving bodies the strength they need.”

For now, however, Saudi Arabia may have the status as a UN-appointed leader on women’s issues, but nixing this week’s proposal for women’s sports colleges only reinforces how hollow that designation really is.