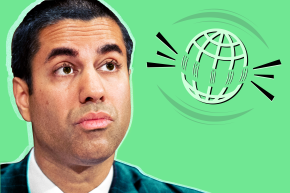 In an expected but highly controversial move, FCC Chair Ajit Pai announced Wednesday that he would seek to undo the previous FCC’s landmark accomplishment, which enshrined net neutrality, a regulation internet advocates have for years considered a priority for a free and democratic internet.

With Pai’s vision in place, internet providers like Comcast and Verizon won’t be bound by law to abide net neutrality, but will instead take a pledge to do so.

Under President Barack Obama, Pai was a fringe, frequently outvoted FCC commissioner who repeatedly echoed internet providers’ claims that net neutrality would hamper the telecom industry, and argued that the FCC itself was grossly overstepping its bounds. But the election of Donald Trump thrust Pai into the agency’s top position, giving him the ability to undo a number of the rules he had recently voted against.

Despite being a wonkish policy, net neutrality is a popular internet topic, cited by supporters and opponents as respectively either vital to or somehow an enemy of internet freedom. Famously, millions of net neutrality supporters — a strong majority of those who weighed in, though the exact number is disputed — told the FCC they wanted net neutrality when the agency called for public comment in 2014.

In a winding speech, often peppered with sarcasm and references to conservative talking points like the Drudge Report website and the incompetence of the Venezuelan government, Pai said he would reclassify the internet through Title I of the Communications Act, rather than Title II.

Without further explanation, Pai also claimed that the earlier net neutrality rules were actually a deliberate distraction created by the Obama White House: “In order to energize a dispirited base, the White House released an extraordinary YouTube video instructing the FCC to implement Title II regulations,” Pai said. “This was a transparent attempt to compromise the agency’s independence. And it worked.”

It’s unclear how Pai’s plan, if adopted, will play out in courts, considering a federal appeals court upheld the previous FCC’s net neutrality rules in June, and future courts may consider that a precedent.

Pai will release a full plan Thursday, he said, followed by a period of open comment. It’s anyone’s guess whether, as was the case in 2014, the comments will come in such a flood that they will knock the FCC’s commenting system offline.