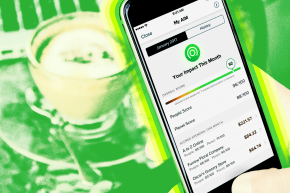 Match your dollars with your values as you make a purchase

Aspiration, a socially conscious online bank with nearly 100,000 customers nationwide, wants to help its customers make purchases that reflect their personal values. The Los Angeles-based company is launching a new tool called Aspiration Impact Measurement (AIM) the gives users their own sustainability score based on what they are buying. Its co-founder said it aims to develop a “financial form of the conscious” that is “built on trust and fairness.”

“Everyday you’ll be able to see, ‘ok, here’s what I did today, here’s my impact on the planet today — positive or negative,” Andrei Cherny, co-founder of the company and former speech writer for Bill Clinton, told Vocativ. “That gives people more personal responsibility and empowers people to make those decisions.”

Each purchase a person makes alters their score on a scale from 1 to 100. If a user is buying coffee at a shop with a low score, the app will suggest other coffee shops nearby that do better. Most big businesses like Apple, Starbucks and Target have scores in the app. Local bossiness might be harder to track. However, Cherny said any local business can submit their own data.

The “people” and “planet” metrics are based on private data sources that gauge a brand’s internal practices and investments. Data points that go into the calculation include things like measures of gender pay gap, employee benefits, employment equality, carbon footprint, renewable energy use and waste.

The tool has been in the making for over a year now, but Cherny said it’s important to have a tool such as AIM in times like these. Many young people are looking for all kind of ways to make a difference and are frustrated by what they’re seeing come out of Washington, especially under President Donald Trump.

“So whether that’s showing up for protest or doing other things, all things are important — but this is one of the most important ways to make a real impact,” Cherny said. “If you’re not going to have leadership in Washington when it comes to climate change or when it comes equality, and some of these other issues, it’s even more important that we as individuals get corporate America and business in America to start acting the right way.”