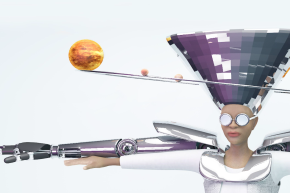 Virtual reality might still be in a nascent stage, but like the rest of the tech industry, it’s already showing signs of lacking diversity in its content and who develops it. Hyphen-Labs wants to change that with its latest installation, which aims to empower black women through VR and a series of what they call “speculative products.”

Hyphen-Lab’s NeuroSpeculative AfroFeminism is an art installation that is “part-situation room, part congregation,” exploring topics of politics, art, science, and philosophy. Some of the products in the installation include earrings that can record police altercations, scarfs that can trick facial recognition software, and sunblock that won’t discolor people with darker skin.

“We had the idea to come up with speculative products that highlight security, protection and visibility,” Ashley Baccus-Clark, co-founder of the project, told Vocativ. “This first episode is specifically about black woman, but this is just the first of many other projects.”

The idea came about when Baccus-Clark bought sunblock that discolored her, which lead to brainstorming for a formula that would not affect people with dark skin. From there, she and the rest of the team (also women of color) began thinking of other products they could develop to make direct statements related to justice and equality issues of today.

Along with the speculative products, Hyphen-Labs also created braids carrying transcranial electrodes alongside a VR experience that hypothetically simulates what happens when you wear them. The VR experience puts audience members in a “neurocosmetology lab” where they are fitted with the braids and transported to a future where black women control the “techniques of brain modulation and cognitive enhancement.”

Baccus-Clark said it was important for Hyphen-Labs to go into VR because there’s a lack of diversity and representation in the field. NeuroSpeculation AfroFeminism has previously appeared at Sundance and Austin’s SXSW festival, but is currently stationed at Tribeca Film Festival’s Virtual Arcade. Once the festival is over, Baccus-Clark said they’ll start looking for funding and create more content while they tour its installation in schools and community centers.

“It’s a very large project that’s encompassing,” Baccus-Clark said. “We really want to take this to communities with people that aren’t able connect with people in the industry or have access to this otherwise.”