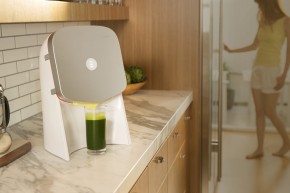 Juicero Mystery Solved: Why Is It So Expensive?
By Allee Manning

Juicero Mystery Solved: Why Is It So Expensive?

The Juicero, a formerly $700 (now $400) Wi-Fi connected juicer, became the joke of the tech news industry last week after Bloomberg ran a story the well-funded, oh-so-Silicon Valley new product. After it was discovered that the product — which uses pre-filled bags of fruits and vegetables, was no more effective at making its raw materials into juice than one’s own bare hands — the Juicero takedowns started trickling in.

Now, Ben Einstein, a product designer and blogger for Bolt, a hardware startup incubator in Silicon Valley, has penned an explainer that chronicles what he discovered by actually tearing down the product to the parts beneath its glossy exterior.

According to Einstein, the bulk of the Juicero’s high cost likely stems from its sleek and Apple product-esque design, eight machined parts, and some major design flaws.

“There are dozens of components and subsystems that are incredibly complex and beautifully engineered, but hopelessly expensive to manufacture and assemble,” he writes.

The final major flaw highlighted by Einstein is the the fact that the Juicero is designed to squeeze the entirety of the ingredient packs equally across its surface at the same time. This requires the machine to apply “thousands of pounds of force.” Other mechanisms that more closely mimic the way, say, human hands would squeeze these packs could have shaved off literally hundreds of dollars of the Juicero’s shelf price.

However, whether it would have garnered the overpriced machine initially positive reviews calling it the “Keurig of juice,” an accolade that now highlights its utter frivolity, is another story entirely.