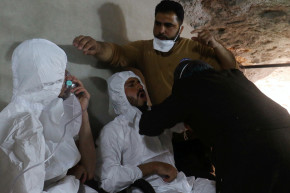 French military and intelligence say victims of the notorious chemical attack showed traces of hexamine, a trademark of the banned chemical

An analysis of blood and urine samples taken from a deadly sarin gas attack in Syria earlier this month “bears the signature” of President Bashar al-Assad’s government and indicates he was responsible for the attack, France’s foreign minister said on Wednesday.

French military and intelligence services published a declassified six-page report which found that the April 4 attack on Khan Sheikhoun in the Idlib province in northern Syria showed hexamine, a hallmark of the banned weapon produced by the Syrian government. More than 80 people were killed in the attack, which spurred the United States to launch a cruise missile strike on a Syrian air base. The samples matched those from an attack in Syria in 2013, which the international community has also said was carried out by the Syrian regime.

“We know, from a certain source, that the process of fabrication of the samples taken is typical of the method developed in Syrian laboratories,” said French foreign minister Jean-Marc Ayrault. “This method is the signature of the regime and it is what enables us to establish the responsibility of the attack. We know because we kept samples from previous attacks that we were able to use for comparison.”

The report said that rebel groups in the area did not have the capabilities to develop and launch such an attack and that the Islamic State was not operating in that area.

“The French intelligence services consider that only Bashar al-Assad and some of his most influential entourage can give the order to use chemical weapons,” the report said.

On April 19, the Organization for the Prohibition of Chemical Weapons said “incontrovertible” test results showed sarin gas or a similar substance was used in the Khan Sheikhoun attack.

In two interviews since the attack, Assad called any evidence of the attack as “fabricated” and claimed his government has never carried out a chemical attack.

The report said French intelligence services know that a Syrian regime Sukhoi 22 warplane struck Khan Sheikhoun six times on April 4, and that samples taken from the ground were consistent with an airborne projectile with sarin-loaded munitions.

Speaking in Moscow, Russian spokesman Dmitry Peskov told reporters that the Kremlin’s position regarding the attack is “unchanged” and that “that the only way to establish the truth about what happened near Idlib is an impartial international investigation.”

Russia, which has supported Assad’s regime in Syria, has asserted that the gas in the April 4 attack had been released after an airstrike hit a rebel-held storage site.