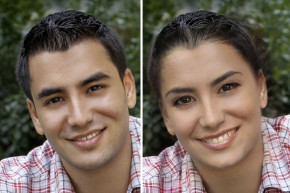 The app reinforces the gender binary and unintentionally exposes its flaws, users say

FaceApp, the latest social media craze, promises the ability to change you — or at least your photo. It claims to let you turn a young face old, make you “hot” (by, controversially, lightening your skin color), and or help you “change genders.” For transgender users and others outside the gender binary, it’s that last gender-bending filter that has provoked difficult and strong emotions.

Chris Lowrance, who was assigned male at birth and identifies as genderqueer/trans-feminine, told Vocativ that they were initially worried the “female” filter would reveal a “perfect but unattainable…dream face.” Instead, they found the resulting image cartoonish. The “old” filter that aged them, however, struck them as particularly eerie.

“It’s the most realistic, and makes me think of my father,” they said. “It makes me worry it’s going to get harder for me to be seen as ambiguous or femme as I age, really.”

Andrew, a 17-year-old trans woman who is currently presenting male and uses male pronouns, has had a more positive experience. Since he isn’t able to get hormones on his own as a minor, he uses FaceApp to deal with gender dysphoria — a term used to describe the distress that trans and non-binary people can experience when they feel their physical appearance differs from their gender identity, or when their identity is questioned.

Andrew describes himself as being “masculine” in appearance, looking like “a very normal guy.” FaceApp was not the first service he has used for the purpose of better envisioning what Andrew will look like when he gets to live life as a woman, but it has been the best, he said.

“I was really impressed, and it made me feel better,” he told Vocativ. “With hormones, you don’t really know how you’ll look afterwards. Seeing the results of FaceApp and seeing that it looked like a normal person…gave me hope for the future.”

Apart from Lowrance and Andrew, many other trans and non-binary users took to social media to unpack some of their feelings about FaceApp.

FaceApp doesn't make you trans, but putting on a gendered filter and crying about the picture probably does

I would advise against trans people using the Face App btw. It will definitely fuck with you.

Trans folks, how does FaceApp make you feel?

that face app meme reinforces limited ideas of gender so please stop sharing it. trans ppl are pointing this out-they shouldn't have to.

Pidgeon Pagonis, an intersex educator and activist, noted that FaceApp and other apps like it “prop up the false notion that there is a clearly discernible binary opposite to one’s gender.”

“The idea of sex and gender falling neatly in a binary is a violent construction that needs to be abolished,” they told Vocativ in an e-mail. “The belief in the dogmatic idea that sex and gender exist in a neat binary is one of the main reasons why intersex kids aren’t left alone and are often forced to endure unnecessary intersex genital mutilation.”

FaceApp’s gender swap function appears to add or remove physical features typically coded as either feminine or masculine, like long hair, facial hair, and face shape or structure. Yaroslav Goncharov, the creator of FaceApp, didn’t respond to Vocativ’s questions about the data the software uses and how it is programmed to interpret sex and gender. But Lowrance, who works in the tech field, says their experience with FaceApp has led them to that doubt trans and non-binary users were considered in the making of this app.

“Algorithms are made by humans, and therefore contain our biases and notions. They aren’t objective,” they said. “For [the creators of the app], it was a novelty. For us, it’s so much more.”