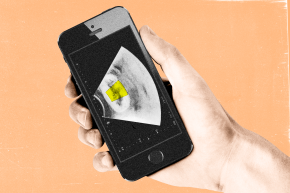 Doctor Uses His Phone To Diagnose Own Kidney Stone

Smartphone ultrasound technology could someday be the norm in medicine

Dr. Eric Topol, a cardiologist and advocate of mobile health technology, had an unexpected chance to demonstrate his ideas recently: he used his smartphone and a mobile ultrasound device to diagnose his own kidney stone at home.

After experiencing pains in his side for several days, Topol decided to try his hand at a self diagnosis. He used the Philips Lumify, a portable ultrasound that plugs into a smartphone, to take a look at the problem for himself. He held the wand to his body and it sent images the right to his phone. His scan revealed a dilated kidney, which confirmed his suspicions. Topol then decided to head into the the emergency room and have another doctor — who was surprised to hear what led Topol to his own self-diagnosis — to confirm it.

I've been battling a kidney stone all wk (& losing) so I did a smartphone ultrasound of my kidney: Dx dilated. Then to ER, CT scan confirmed pic.twitter.com/VxwoDLhcgh

Though Topol doesn’t specialize in the kidney, he had trained himself to take images of all his organs and conducted a “full body medical selfie” he took last January.

“I never thought I was going to need to use it,” he told Vocativ. “I thought it was a kidney stone, but I wasn’t sure because it wasn’t severe, but it was persistent.”

Topol, who uses a smartphone ultrasound on all of his patients, had previously demonstrated the effectiveness of this mobile device in a real-life setting after using an electrocardiogram hooked up to his iPhone to diagnose a fellow passenger’s heart attack on a plane back in 2012.

More A Mobile Heart Monitor For The Rest Of Us

Though select smartphone ultrasounds have been FDA-approved since as early as 2011, Topol says the tool is not quite seeing significant the gains in popularity.

“It’s very hard to get doctors to use this,” he said. “Beyond a lack of training and habit, there are reimbursement issues. If you use this device as a doctor, you can’t bill for it. Everything is aligned for doctors not to use this technology, unfortunately.”

In addition tho these concerns, some overly simplistic smartphone-enabled mobile health applications — like the controversial blood pressure reading app Instant Blood Pressure — have given this kind of emerging tech a bad name. Topol and his associates, however, have published research that shows the image quality of these ultrasound readings can be as good as that of traditional $400,00 hospital machines.

“When I use this with patients, we look at it together in real time,” he added. “Normally, when you do an ultrasound you send someone to a lab. The technician isn’t allowed to tell that patient anything…so the patient goes home without any knowledge of what the scan shows. [Using smartphone ultrasounds] is a real bonding experience between the doctor and the patient.”

In a future in which consumers are able to have this tech made affordable and accessible, Topol imagines that getting ultrasound results could be as simple as holding the detachable probe to one’s body, and sending the footage to a doctor. Going a step further, he added that, ultimately, trained algorithms could be able to interpret the footage.

“That’s where I see this eventually going,” he said, noting the cost and convenience benefits this would allow for.