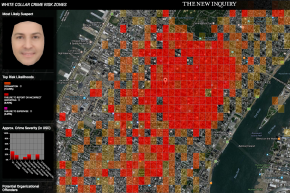 New App Alerts You When You’re Near White Collar Criminals

Predictive policing has become one of the hottest new tools in law enforcement’s arsenal, using machine learning algorithms to feed cops visual “heat maps” of where street crime is most likely to occur in cities. But such technology often adds implicit racial bias into its predictions, resulting in over-targeting of marginalized communities.

Now, a group of researcher-artist provocateurs have used the same technology to build their own crime hotspot prediction app — one that specifically displays which areas are likely hotbeds of white-collar crime.

“Police departments, and predictive policing systems, have historically focused their efforts on reducing ‘street crimes.’ However, the development of novel machine learning techniques presents law enforcement with an opportunity to expand their policing efforts into a new domain: high level financial crime,” creators Sam Lavigne, Francis Tseng, and Brian Clifton wrote in a whitepaper accompanying the project, which is hosted by the online magazine The New Inquiry. “We propose and develop a predictive policing algorithm, the White Collar Crime Early Warning System (WCCEWS), for identifying and assessing the risk of large-scale financial crime at the city block level.”

The resulting app, White Collar Crime Risk Zones, is meant to cheekily highlight the extreme disparity between the sweeping police crackdowns regularly suffered by poor communities and the comparatively nonexistent punishment of financial crimes committed by wealthy bankers and other white-collar criminals. The researchers point to polls showing that white-collar crime makes 70 percent of Americans feel unsafe, and that 45 percent believe police aren’t doing nearly enough to combat it.

But the app delivers exactly what it advertises, turning the same methods used by predictive policing tools against the corrupt and well-to-do criminals of Wall Street.

The app’s algorithmic model is trained on historical data about financial crimes collected by the Financial Industry Regulatory Authority since 1964, and incorporates geospatial data to compute the level of risk associated with a certain area. Altogether, the researchers say their system can predict white-collar crime with 90 percent accuracy, “a 197.37% improvement of precision when compared with other predictive policing algorithms.” The model can also predict what kind of white-collar crime is likely to occur in a given area — like insider trading or securities fraud — as well the severity of the crime, based on what fines would be levied against the offender.

In New York City, the biggest crime hotspots appear over many areas where you might expect them: The Financial District, Midtown Manhattan, and Trump Tower are all covered by thick squares of red, indicating an extremely high probability of white-collar crime. By downloading the White Collar Crime Early Warning System’s iOS app, users can also get alerts when they’re entering an area where such crime is likely to occur.

The app even displays an algorithmically generated mugshot of the offender’s face, based on 7,000 photos of financial industry executives mined from LinkedIn — a critique of the methodologically flawed and controversial studies that claim to predict the likelihood of someone committing crimes based only on their facial features.

“Recently researchers have demonstrated the effectiveness of applying machine learning techniques to facial features to quantify the ‘criminality’ of an individual,” the authors write in their whitepaper. “We therefore plan to augment our model with facial analysis and psychometrics to identify potential financial crime at the individual level.”

After that, the app’s only missing feature will be the ability to run around your city catching Wall Street crooks like Pokémon.