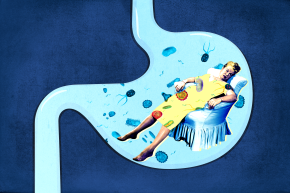 Chronic fatigue syndrome affects millions, with no clear cause, but scientists think now our microbiomes may play a role

For the millions of people afflicted with the debilitating condition of being chronically tired, concrete answers have been in short supply.

It was only two years ago that a broad committee of experts assembled by the federal government declared that myalgic encephalomyelitis and chronic fatigue syndrome, or ME/CFS, was a biological disorder — after decades of critics insisting it was largely a psychological illness.

But while we now know that many with ME/CFS have a viral infection right before their first bouts of enduring muscle pain, headaches, and the telltale exhaustion show up, scientists still haven’t been able to hone in on a clear culprit, or even create an accurate test. Similarly, efforts to find a reliable treatment have floundered, and few sufferers ever gain back the energy they had before.

But a new study published Wednesday in Microbiome, while not hitting any home runs, may provide us with more evidence of a key role player in CFS — our own gut bacteria.

Researchers examined stool samples taken from 50 volunteers with CFS and compared their bacterial footprint, or microbiome, with those taken from healthy volunteers. Nearly half of the CFS patients had also been struggling with irritable bowel syndrome, or IBS, another mysterious condition with no clear cause that often affects CFS sufferers.

Compared to healthy people, the team found recognizable patterns of different gut bacteria in not only everyone with CFS, but between those who had both CFS and IBS and those who only had CFS without IBS. They also found that the more abundant certain species of gut bacteria were, the more likely patients had worse CFS and IBS symptoms. Lastly, they found these patterns led to differences in how their gut bacteria metabolizes its fuel supply, making byproducts which in turn could affect the body’s health.

“Individuals with ME/CFS have a distinct mix of gut bacteria and related metabolic disturbances that may influence the severity of their disease,” said co-lead author Dorottya Nagy-Szakal, a postdoctoral research scientist at Columbia University’s Center for Infection and Immunity, in a statement.

In recent years, scientists have theorized that IBS involves dysfunctions in the gut-brain axis, the unique tether between our digestive system and the nervous system that runs through not only neural but hormonal connections. These findings indicate the same could be true of chronic fatigue, whether someone has IBS or not.

Of course, at this point, there are still major questions. Are people with both IFS and CFS becoming sick from the same thing at the same time, like an infection that disturbs our gut bacteria? Or does one condition spring up from the other? Then again, maybe the changes in gut bacteria simply come after getting either CFS or IBS, rather than help cause it.

By affirming previous research, though, Nagy-Szakel and her team hopes these findings could someday lead to a definitive diagnostic test for both disorders by using gut bacteria as a biomarker, and from there, maybe even treatments.