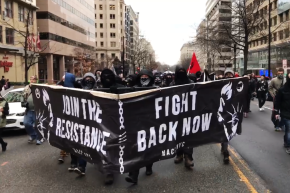 Masks and hoods are staples of "black bloc"-style protestors, who recently have been raising hell at white nationalist events across the country

A small town in Kentucky issued an emergency ordinance on Monday prohibiting people from wearing hoods and masks during a neo-Nazi rally scheduled this weekend — a move apparently targeting activists who plan to protest the neo-Nazis.

The city commission in Pikeville, Kentucky, where the white nationalist Traditionalist Workers Party and other neo-Nazi organizations will hold their rally on Saturday, found that the rally has created an “emergency” for which banning “hoods and masks” is required to protect the “general [welfare] and safety of the community.”

“Because of the rally and because of a lot of social media wording, reports and rumors out there and also there are now counter protest groups that are coming in looking at the possibility of inciting a riot or violence and to disguise their identity,” Pikeville City Manager Donovan Blackburn told a local media outlet. “So for the benefit of public welfare and safety the Commission elected to pass a model ordinance tonight that would prohibit somebody from wearing a mask or a hood in downtown or in the city of Pikeville within certain boundaries.”

Many of those who plan on protesting the rally are members of anti-fascist groups (Antifa) that have been demonstrating at white nationalist events across the U.S. for the past several months. In January, like-minded demonstrators rioted in Washington, D.C., in protest of President Donald Trump’s inauguration. Many of the protestors wore masks, hoods and other clothing that hid their identity in accordance with the “black bloc,” anarchist style of protesting. In February, a speech by far-right provocateur Milo Yiannopoulos at the University of California, Berkeley was cancelled after “black bloc” demonstrators protesting Yiannopoulos broke windows and set fires prior to his speech.

“Black bloc” protestors have also raised hell at speeches by Richard Spencer, the de-facto leader of the “alt-right” movement. In January, Spencer was punched in the face by a “black bloc” protestor in a video that went viral and prompted the question of whether it’s OK to punch a neo-Nazi — a question that was virally posed on social media and by the New York Times. Last week, Spencer gave a speech at the University of Auburn where masked “black bloc” protestors clashed with his supporters, leading to at least three arrests and other general chaos and violence.

The ban would also apply to members of the Ku Klux Klan, who often wear masks and hoods during their demonstrations and rituals. It’s unclear whether members of the Klan will be in Pikeville for Saturday’s rally.

On social media, the “alt-right” and its ilk are applauding the city of Pikeville’s decision.

“This was a smart move by Pikeville,” Hunter Wallace, a high-profile member of the “alt-right” who runs a website called Occidental Dissent, posted on Twitter. “These antifas will be much less likely to get violent and vandalize property without their masks.”

Meanwhile, members of the “Antifa” see the city’s decision as helping the neo-Nazis.

“In an attempt to aid the upcoming fascist rally, Pikeville passed an emergency ordinance to make mask wearing an arrest able offense,” a person with the handle “Captain Howdy” posted on Twitter. The poster’s Twitter bio states: “We will continue to break the law and destroy property until we win.”

In an attempt to aid the upcoming fascist rally, Pikeville passed an emergency ordinance to make mask wearing an arrestable offense.

This was a smart move by Pikeville. These antifas will be much less likely to get violent and vandalize property without their masks https://t.co/bit858artN

As the political offshoot of the Traditionalist Youth Network, the Traditionalist Workers Party was founded in 2013 by infamous white nationalist Matthew Heimbach. The group advocates for white separatism and follow a white supremacist interpretation of Christianity. Last year, Heimbach was criminally charged for pushing a woman at a Trump rally in Louisville. In March, he was named as defendant in a lawsuit alleging that Trump incited violence at his rallies through his vitriolic rhetoric, as well as through directives to his supporters to “get ’em out of here” when protestors would disrupt his rallies.

“Heimbach relied on Trump’s authority to order disruptive persons removed and that Trump was legally within his rights to ask other attendees to assist in defending their constitutional rights,” according to court documents filed last week on behalf of Heimbach.

Joining Heimbach in Kentucky on Saturday will be members of the National Socialist Movement (NSM), the premier neo-Nazi organization in the U.S. The penalty for those arrested for wearing masks or hoods to the event include a $250 fine and up to 50 days in jail.