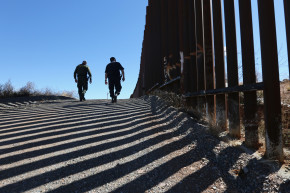 There are 800,000 fewer Mexicans living in the U.S. without documentation than at the end of the Great Recession, a new Pew study finds

The number of undocumented immigrants living in the U.S. fell to its lowest level since the end of the Great Recession, a decline punctuated in part by a steady drop in the number of Mexicans without legal status, a new study shows.

An analysis of U.S. census data by Pew Research Center, published Tuesday, found there were 11 million immigrants in the country illegally in 2015 — roughly 3 percent fewer than the 11.3 million undocumented people in 2009, when the economic downturn bottomed out. During that same six-year period, the number of Mexicans in the country illegally plunged to 5.6 million from 6.4 million.

“The numbers are not going up, and in fact, the numbers for Mexicans have been going down for almost a decade now,” Jeffrey Passel, a senior demographer at Pew, told the Associated Press in an interview. “And that is counter to a lot of the rhetoric you hear.”

While illegal immigration in the U.S. surged for nearly two decades during the 1990s and 2000s, reaching a high of 12.2 million in 2007, it later fell and has since hovered around 11 million, Pew’s report shows. And as Mexicans living in the country illegally has dwindled, the number of undocumented immigrants from other parts of the world has grown. Asian immigrants without legal status rose by to 1.5 million in 2015, from from 1.3 million in 2009. Those living in the U.S. illegally from Central America, meanwhile, increased to 1.8 million from 1.6 million during that time, according to the report.

Such findings, however, are unlikely to push the Trump administration away from its plans to ramp up immigration enforcement along the U.S. border with Mexico — at a cost of tens of billions of dollars. In addition to aggressively deporting illegal immigrants, the new president and his cabinet want to hire 5,000 new Border Patrol agents and construct a barrier along the U.S.’ southern border.

“This is ground zero – this is the front lines, and this is where we take our stand,” Attorney General Jeff Sessions said of the U.S.-Mexico border last week during a stop in southern California.

But Robert Warren, a demographer and senior visiting fellow with the non-partisan Center for Migration Studies, told Vocativ that fewer than half of all undocumented immigrants entering the U.S. now arrive by crossing a border illegally. A recent study co-authored by Warren found that two-thirds of all people who joined the undocumented population in the country in 2014 did so by entering with a legal temporary visa.

“That has huge implications for the administration’s proposed wall,” Warren said, adding that an increase in illegal immigration from Mexico over the next few years is unlikely. “At some point you have to determine what’s actually cost effective.”

Philip Wolgin, an immigration expert at the left-leaning Center for American Progress, said that Pew’s findings served as more evidence for the Trump administration’s misguided approach on immigration policy. “I think this pushes back on the notion that the response we should have right now is to militarize our border and create deportation force,” Wolgin told Vocativ. “The reality just doesn’t bear that out.”