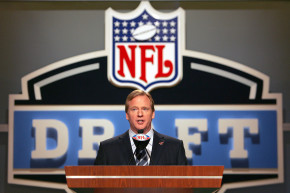 A story in which no one looks good

A college football player who is projected to be taken early in the first round of the 2017 NFL Draft has been accused of sexual assault but not formally charged, and all parties involved are handling this as badly as possible.

According to Cleveland19, a local CBS affiliate with a reputation for tabloid-style, sensationalistic journalism, the potential first round pick was staying at the Westin Hotel where, after a night on the town with some friends, he met a 23-year-old unnamed woman at a local bar who went back to his room where he was having a party. On April 9 at 3:50 AM, police and EMS workers were called to the Westin by an off-duty officer where statements were provided and the woman, who according to police radio traffic was a “victim of sexual assault,” was taken to a hospital, though the player was no longer present.

For more than two weeks, no charges have been filed nor is the incident report publicly available, and despite multiple requests, the police have been giving Cleveland19 the runaround.

Our team was first told to contact Cleveland Sex Crimes, then was referred to Chief Calvin Williams. In compliance with Cleveland public record retention policy, our investigative team formally filed several record requests. Cleveland Public Records told Cleveland 19 in a response to our request for the incident report that they were waiting for the report from police.

An attorney representing the player called the accusations “ludicrous and ridiculous,” before quickly pivoting to the most oft-used tactic when defending an athlete credibly accused of sexual assault.

“In my opinion this young lady is an opportunist and it’s actually despicable,” he said, adding that the player would be giving a statement to the police after the draft was over and that statements provided to law enforcement by three witnesses back up his client’s claim of innocence. What makes this all the more bizarre is that Cleveland19’s own report states that they have chosen not to name the player despite getting a statement from the player’s attorney.

The history of law enforcement looking the other way or outright providing cover for athletes in sexual assault cases is a long and sordid one, but the problem is, Cleveland 19 can’t back up their eyeball-grabbing, Just Asking Questions headline, “Are Cleveland police stalling a sex assault report involving a top NFL Draft prospect?”

Yes, if the cops are stalling because the report and/or charges would damage a kid’s draft stock, it’s both a newsworthy and important story and there is a lot of damning circumstantial evidence burbling around here. But Cleveland19 hasn’t gotten the goods. Go find someone in the department to speak, on background, anonymously, or whatever, who can say definitively that his status as a prominent athlete is the reason the report isn’t publicly available.

What other reason might there be? Cleveland19 doesn’t know, and comparing the ease and immediacy with which they were able to secure an incident report from a completely unrelated sexual assault case from the same day at the same bar is misleading at best. It doesn’t give the reporter the license to write: “The difference? The case that was filed doesn’t involve a high-profile suspect with potentially millions to lose.”

Nor is there much value in broadcasting a segment in which reporter Carl Monday—yes, that Carl Monday—harangues various spokespeople who already have stated that they are not at liberty to discuss the case. It’s garbage and they have to know it’ll lead to rampant speculation about the player’s identity on message boards and send Reddit sleuths scouring old articles to see what players were in the area a few weeks ago. (We will not link to those sites. If you want to read unsubstantiated and dumb gossip that might harm any number of reputations for no good reason whatsoever, feel free to Google.)

And again, Cleveland19 knows the identity of the player. Until they cough up a good reason for not naming the accused player, Cleveland19 is guilty of the same thing they’re casually accusing the police of doing.

UPDATE: TMZ appears to have gotten its hands on the heretofore-unavailable police report, naming Ohio State cornerback Gareon Conley as the individual accused of sexual assault.

According to the report, the accuser says she met Conley in an elevator and he asked her to have a foursome with another friend of his. The woman says she declined and offered to watch the other people have sex instead.

A short time later, the woman says Conley unbuttoned her pants and began to have sex with her. She claims she said, “No, stop, it hurts!” but he kept going until he finished. She says he then kicked her out of the hotel room.

Two of Conley’s friends claimed her account was inaccurate, saying she was merely upset that she had been told told to leave. A rape kit was administered at the hospital, but the accuser declined to speak with the police. Though TMZ did not print a quote from Conley, they state that he “adamantly DENIES the allegations.” [emphasis theirs]

Given the speed with which TMZ followed up, it does make you wonder, though, if Cleveland 19 ran with a report lacking concrete evidence that the police were giving preferential treatment to Conley just to grease the skids.