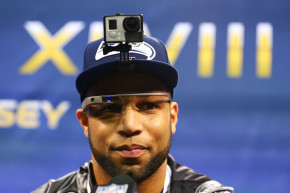 NFL Players Can Now Profit Off Their Wearable Data

This could be your chance to find out how fast Odell Beckham really is or, uh, how much Aaron Rodgers sleeps

The NFL’s weekly injury report is already intricate, what with its listing of every player’s ailment and likelihood of playing. Even if some teams, like the Patriots (of course), have engaged in chicanery in the past by noting Tom Brady as “probable (shoulder)” nearly every week for seven seasons, generally fans and gamblers alike can peruse status reports for each player, itemized by body part.

A recent landmark deal between the NFL Players Association and wearable device company Whoop could open previously unimaginable new levels of detail in that weekly publication. Instead of a simple notation like “Adrian Peterson, doubtful (knee),” there could be an inclusion of “Frank Jones, questionable (high strain score with peak skin conductivity)” or a gameday addition such as “John Smith, out (had seven drinks and four hours of sleep last night)”.

While this new partnership has some minor implications such as granting players the ability to personalize—and then license for sale—the bands on their wrist wearables, the two most important bullet points on the release are these two:

*The NFLPA and WHOOP will study the effects of travel, sleep, scheduling, injuries, etc. on recovery and generate reports to advance player safety and maximize athletic performance.

*NFL players will have the ability to commercialize their WHOOP data through the NFLPA’s group licensing program.

The important caveat is that the players will “own and control” all of the information gleaned from the devices—a considerable catalog of bits and bytes given that there are five sensors recording data points 100 times per second—and that has been a major issue in other leagues. Major League Baseball allows its players to wear a couple of biometric devices in games (and in training, of course), but few do as the union has voiced serious concerns about the privacy and use of that data. Poor sleeping habits or even more harmful medical conditions could be detected and, the players fear, held against them at the contract negotiating table.

Whoop is already used by many individual pro athletes and several college programs, including Harvard and Tennessee, whose athletes told Deadspin about their own privacy concerns in using the devices. In the NCAA, where student-athletes have few rights and no union, this is an especially serious issue as one side (the coaches and administration) have all the leverage.

In the NFL, however, this has the makings of a beneficial partnership. Careers are already short with few truly guaranteed contracts, so players should try to snare every last dollar they can out of their time in the league. And there’ll be demand for this information. The example Bloomberg gave was of Tom Brady and Cam Newton doing the same workout with a side-by-side comparison of their heart rates, a proxy of their respective fitness abilities.

Even better are the aggregate uses—the collection and tabulation of dozens or hundreds of players could produce fruitful research in crafting training and travel schedules to maximize performance and sleep—and the individual ones that might one day show up on a TV broadcast.

Mets outfielder Curtis Granderson, who is part of the baseball union’s leadership, gave the example that displaying the heart rates (and this time, by implication, nerves) of a hitter facing a closer with two outs in the ninth inning might catch the interest of viewers at home. His concern is that baseball’s bargaining agreement had no compensation structure in place for such an invasion of privacy—players should have to opt in to that and also be compensated for giving so much of themselves.

There are dozens of apt uses in a football game, from comparing a wide receiver’s speed in the first quarter versus the fourth to show fatigue or a defensive lineman’s vitals at the beginning of a no-huddle drive compared with the end to see how well he kept pace. Or a kicker’s sweat production before a game-winning kick. And on and on.

At least these guys are professionals and if they want to make a little extra coin by revealing sensitive information, there is now an agreed-upon structure in place, so good for them.