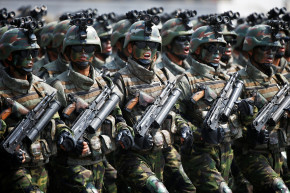 To Solve The North Korean Crisis, We Need China
By Michael Cruickshank

To Solve The North Korean Crisis, We Need China

By raising the specter of military action on North Korea, the White House is forcing Beijing's hand

North Korea represents an almost perfect international crisis. It is a closed state with a leadership hell-bent on maintaining power, at any cost. Its nuclear program, which has been in development since the 1990s, is seen as the ultimate guarantor of this power.

The country’s current leader, Kim Jong Un, has overseen nuclear tests of increasing complexity as well as the development of land and sea-based missiles designed to carry these weapons. Most experts now believe that the country already has the ability to strike regional targets with these nukes, using their pre-existing arsenal of medium-range ballistic missiles.

As time goes on, the number of nuclear weapons North Korea has only increases. According to most estimates, the country soon will also have operational intercontinental ballistic missiles (ICBMs) capable of striking the U.S.. Eventually, the deterrent effect of these weapons would make war against North Korea unimaginably costly, and the international community would have to accept the permanence of the Kim Regime.

Over the last month, the administration of President Donald Trump has taken a new and more aggressive posture towards North Korea, known officially as the Democratic Republic of Korea (DPRK). Following provocative missile tests earlier in the year, the White House said it would deploy a carrier strike group to the Korean Peninsula. Multiple U.S. officials stated that “all options were on the table,” including military action, when it came to dealing with the situation.

American officials also broadcast concern that North Korea was preparing for yet another nuclear test to coincide with the 105th birthday of the country’s ‘Eternal President’ Kim Il Sung. A widely-circulated story claimed the U.S. was even prepared to launch a military strike on the country in the event this test went ahead.

To say such a strike would be risky, would be an immense understatement.

“It is highly unlikely that North Korea would sit back and absorb a blow struck by the United States. Any U.S. military action against North Korea has the potential to escalate into a large-scale conflict,” says Kelsey Davenport, Director of Nonproliferation Policy at the Arms Control Organisation.

Indeed, a North Korean response would be shockingly destructive even without the country using its nuclear weapons.

“The real threat is the thousands of artillery tubes pointed at Seoul. […] quite a few pieces of artillery are going to land on a city of 20 million people, including 28,000 U.S. service personnel and their families,” says Ken E. Gause, author of the book North Korean House of Cards.

“It could be quite devastating – there could be a sizable loss of life in the first 48 hours before we could degrade North Korea’s artillery.”

More The North Korean Nuclear Nightmare May Already Be Here

Such an artillery attack would also likely involve the use of chemical weapons known to be possessed by North Korea, such as Sarin and VX, further increasing the civilian and military casualties. Should the conflict escalate even more, and North Korea attempt to use nuclear weapons, the death toll would be higher still.

“If a single nuclear warhead the size of the bomb dropped on Hiroshima was detonated above Seoul, it would likely result in more than 100,000 deaths and nearly three times that many injuries,” says Davenport.

But is the U.S. really threatening to take such massive risks in order to stop North Korea’s nuclear program?

“The U.S. doesn’t seem to be thinking there is a possibility that the crisis could escalate. We’re not flowing forces into the region, which you think we would be doing if in fact we thought there would be a major response to any potential military action,” said Gause.

Instead, the reason for the White House’s actions is likely linked to the one country that holds the power to bring North Korea into line: China.

China is the only country which has any significant trade with North Korea. In fact, approximately 80-85 percent of North Korea’s total international trade, is with China. Most critically, China buys a significant amount of coal from North Korea, while North Korea buys almost all of its crude oil from China. Without this, the North Korean economy, and indeed its ability to fight aggressive wars would be severely crippled. In the past, China has been reluctant to cut off this trade due to the fear that it would lead to the rapid collapse of the DPRK and a refugee crisis on its borders.

But with tensions rising to unprecedented levels on the Korean Peninsula, China’s leadership seems to be changing its tune. A confrontation between the U.S. and the DPRK would be immensely destabilizing for the entire region, and would likely lead to extremely negative geopolitical and humanitarian outcomes for China. By raising the specter of military strikes the U.S. can be seen to be forcing China’s hand.

“China does not want to see a preemptive strike or military conflict between the US and North Korea. Given China’s escalating frustration with North Korea […] China is taking measures to press North Korea to refrain from further provocation and return to negotiations. This is indeed partially motivated by the concern about potential U.S. military actions, but at least equally so by its desire to contain the North Korean provocation,” says Yun Sun, an expert on China-U.S. relations at the Stimson Center.

In recent weeks China has also shown signs that it is taking the threat of U.S. military action more seriously. Following reports that the DPRK was about to test another nuclear weapon, China’s Foreign Minister remarked that he had the feeling that conflict could “break out at any moment”. Perhaps tellingly, he did not just blame the U.S. and South Korea for destabilizing the situation, but also North Korea. As well, the Global Times, a Chinese state-run publication ran an editorial suggesting that Chinese society would approve of an oil embargo.

While some signs coming out of China are positive, there is still no guarantee that the country will choose to place an oil embargo on North Korea.

Lisa Collins, a fellow in the Korea Chair at the Center for Strategic and International Studies, points out that the mixed messaging coming out of China reflects a split between its officials and academia.

More China Wants U.S. To Be ‘Cool-Headed’ When Dealing With N. Korea

“[There are ] the traditionalists – the old school officials and academics who believe that no matter what they should stick by North Korea […] and then you have the more moderate people who think that there should be some change because North Korea’s behaviour is becoming much more dangerous to China’s national interests,” explains Collins.

Nonetheless, she does not believe that particularly harsh Chinese action against North Korea is  likely.

“China will not take any actions that will further destabilize the region. They will put pressure on North Korea to a point, and then when it gets to a certain point where it would cause real destabilization inside North Korea I think that’s where they would stop,” says Collins

If the U.S. is indeed trying to raise tensions in an effort to force China’s hand, they may yet need to go further. But, in this game of rhetorical brinkmanship, both sides know that the other doesn’t really want to go to war – the costs to both sides would be devastating – however, they must give the appearance of being ready to attack at a moment’s notice.

It goes without saying that this would be appallingly risky. While U.S. military forces are not serious (for the time being) about striking North Korea, the rhetoric is likely to put Kim Jong Un on edge. In the absence of a serious explanation of its actions and policies, the DPRK could just as easily interpret American bluster as a serious threat of war.

“To be honest we just don’t know that much about the Trump Administration’s overall strategy with regard to North Korea,” says Collins.

By some accounts, a 6th North Korean nuclear test is days or weeks away. When it explodes, so too will the rhetoric and the threats. But with hundreds of thousands of lives at stake on both sides, military action would be the wrong path to take.