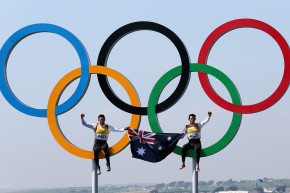 The president of the Australian Olympic Committee (AOC) is a real piece of work. John Coates has held the title for 27 years, currently earns a salary of $542,695 per year, and has maintained a vise-like grip on the organization using bullying, intimidation, death threats, and blackmail. On Saturday, a report in Fairfax Media alleged that he also used his title to funnel cash to a marketing company he used to work for and is stacked with his cronies.

Sports Marketing and Management (SMAM) has held the exclusive marketing rights to the Australian Olympics for the duration of of Coates’s reign, a contractual agreement that was recently extended through 2032. That’s not a coincidence. Coates served as SMAM’s founding director and company secretary while he was still serving as vice president of the AOC in 1986. He left SMAM in 1989, a few months before its partnership with the AOC began.

Over the years, the AOC paid millions out to SMAM—over $11 million from 2008 to 2016 alone—which was purchased by the French media conglomerate Lagardere in 2012, a deal which required the AOC’s approval. But even if he had formally left the company, he still managed to keep a hand in the business.

One thing all those men had in common was membership of a secretive lunch group called Club 13, along with Mr Coates. That group has met monthly for decades. According to an AFR investigation in 1998, eight members of that club have, over the years, “been involved in Olympic business or benefited from Olympic contacts while developing and maintaining a strong personal relationship with Coates”.

Coates denied that he had ever personally received any payment or maintained a financial interest in SMAM, calling himself “an honorary director, put in to look after the AOC’s interests.” Fairfax Media delved into the muddled contractual agreements shared by multiple shell companies scattered across Australia, the United Kingdom, and the British Virgin Islands, yet they were not able to determine who actually holds all of the company’s shares, a mystery that Coates was not able to solve.

“To be honest, I don’t know who every single share is owned by, but as far as I am concerned it is Bushell’s company” he said. “From my memory, it was Barker’s company and he sold it to Bushell when he was getting older.”

According Ryan Wells, a former employee of the AOC, the current media director, Mike Tancred threatened to kill him in 2004. “Mike Tancred came in,” he said. “He stood about 60cm from me, stood over me and threatened me: ‘I will kill you’.”

He filed a formal complaint, but according to Wells, no actions were ever taken and within six months his job was made redundant. Last week, another former AOC official went public again alleging that Tancred leveled death threats. Fiona de Jong, the ex-CEO of the AOC and seen as a potential successor to Coates, resigned in October. In December, she was attending her going away party, when, moments after a conversation with Coates about an allegation that de Jong had leaked conversations between AOC board members to the press, Tancred called her on the phone.

“He said, ‘Fiona, withdraw the complaint or I will bury you’.”

Then, she claims, Tancred issued a highly detailed and personal threat. De Jong does not want to spell it out, except to say he was “abusive and threatening to me and would have affected my family life”.

“The nature of his conduct could best be characterised as blackmail and intimidation,” she says now.

“Over the course of my career I’ve been exposed to plenty of heated discussions, and poor choice of words or bad language in the workplace, but this went way beyond that.

“It’s one thing to take me on, but quite another to involve my family.”

Sources further told Fairfax Media that Tancred, Coates’s personal attack dog, is a “protected species” at the AOC, and while multiple complaints have been filed about his abusive behavior, none have resulted in a change in his job status or anything resembling a formal reprimand.

Coates is being challenged for the presidency by Danielle Roche, a former gold-medal winning Olympic hockey player, who has promised to forgo a salary and funnel the cash back to Australian Olympic athletes. She too said that she’d “heard rumors” about Coates and Tancred, but declined to comment.

An election to determine the next president of the AOC will be held on May 6, though the votes will not be made public.