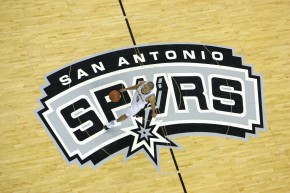 Be careful what you ask for at San Antonio tattoo parlors

Say you’re a basketball fan in the San Antonio area who believes Kawhi Leonard and the No. 2-seeded Spurs are on the verge of continuing the franchise’s tremendous run from the past two decades, and you want an indelible tribute to the team inked on your person that’ll be visible to everyone you meet.

Prepare for an uncomfortable conversation.

Apparently the Spurs’ logo has become a favorite of a notorious San Antonio-area prison gang Tango Orejon. A fascinating San Antonio Express-News story quoted several tattoo parlor employees who said that requests fro the Spurs logo rises during the playoffs and that not all customers are aware of the connection.

“We won’t put it on someone’s neck or face or further down their arm where someone could see it and assume they’re associated with that gang,” Laura Rosario, manager at Ring of Fire, told the newspaper. “We try to make sure that they know.”

In other words, it’d be something like: ‘Uh, hey buddy, we know the local basketball is pretty good . . . BUT . . . you may not want to broadcast your affiliation to a dangerous gang, making yourself a target for crimes and violence you have no part of. Just a thought.’

Such co-opting of sports logos by gangs is not unprecedented. This story in the Houston Chronicle noted that the Astros’ and Cowboys’ markers have also been used in that way. This Complex.com list shows that many other non-Texan teams are facing a similar predicament, with hats as well as tattoos; baseball clubs seem particularly susceptible. And there’s really nothing the franchise can do about it. Suing a gang for copyright infringement probably wouldn’t get anywhere.

Jackie Garcia, part owner of San Antonio’s Voodoo Tattoos, told the Express-News that Spurs requests have really declined in recent years as a result, and many tattoo artists will revive the old pink, aqua, and yellow colors of the old logo to minimize confusion with the black-and-silver modern icon.

Indeed, pink, aqua, and yellow coloring wouldn’t strike many people as an intimidating color scheme for a gang, just as there are plenty of other logos and mascots that wouldn’t exactly lend themselves to anything serious. I mean, can you imagine anyone pledging loyalty to group willing to choose Youppi as its symbol?