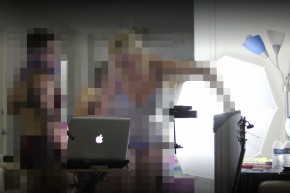 Paige took to Twitter on Sunday to go public with her allegations. “HEY @hotgirlswanted REMEMBER WHEN YOU PROMISED TO CUT MY PART BC YOU WERE TRYING TO MAKE ME TALK ABOUT MY FAMILY AND I WAS UNCOMFORTABLE,” she asked in one tweet. Paige followed up, “BECAUSE I DO. THANKS FOR KEEPING YOUR WORD. SNAKES.” She went on to explain that she is “mortified” and alleged that “they completely lied and put me in [the show].”

In an email to Vocativ, she additionally alleges that the show revealed her legal name. During one scene, her Facebook profile is displayed on-screen along with her real first name, which Vocativ verified with an image of her passport. Her last name wasn’t included in the show, but that was largely luck. “I’m very fortunate I took my last name off there sort of recently,” she said. Paige says she has had stalkers for years now and takes this leak of private information as a serious threat.

Effy Elizabeth, a cam performer, only found out that she was featured in the Netflix series when a friend told her on Twitter. The series used a publicly available Periscope clip of her with fellow cam performer Autumn Kayy. Both women are upset the show allegedly used the footage without their permission and did not warn them that it would appear in the series. Effy Elizabeth said her immediate family was already aware of what she did for a living, but she still felt she had to reach out to tell them, just in case they came across it.  “I hated having to warn my family,” she said in a Twitter direct message to Vocativ.

Now her closest family members are worried that more distant relatives will find out about her work by watching the Netflix series. “I’m okay being open but my family does not deserve any backlash bc of the job I chose for myself,” she wrote. Effy Elizabeth is already visible as a sex worker on social media, but as she points out, “everyone is on Netflix” — the potential reach is exponentially greater than the camming community on Twitter. She says she’s scared because “I know it’s going to be almost impossible to get any sort of justice for this.”

Kayy says she attempted to direct message the producers via the @HotGirlsWanted Twitter account and received a response reading in part, “We can put you in touch with our production company so they can explain fair use.” (Fair use refers to a term in U.S. law that allows for certain public materials to be used or excerpted by others.) And at least one additional cam performer took to Twitter to express outrage that her image was featured in “Hot Girls Wanted,” during a scene when someone is shown browsing a cam site.

Netflix, several of the show’s directors — Jill Bauer, Ronna Gradus, and Peter LoGreco — and the production company behind the series, Herzog & Company, did not respond to Vocativ’s requests for comment by press time. (We will update this story if we hear back.)

It’s unclear whether any of the women would have a legal case against Netflix or the show’s producers, given that Paige signed a contract before changing her mind and the imagery of other performers appears to be publicly available. Paige’s contract, which she provided to Vocativ, grants the “irrevocable right to film, tape, photograph and record me by any and all means” and allows the producers to use “my actual or fictitious names, voice, likeness and any biographical facts.” But, regardless of the legality, there is the fact that a show driven by concern around women’s experiences in the adult industry has left several sex workers feeling less safe and unfairly treated.