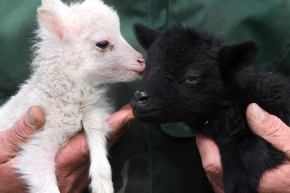 Premature Baby Lambs Survive For Weeks In An Artificial Womb

It’s surprisingly hard to simulate a womb. Though scientists have come a long way towards sustaining the 30,000 premature babies born every year, early birth is still the primary cause of death among newborns. Now researchers from the Children’s Hospital of Philadelphia have created the most successful synthetic womb to date and have used it to incubate sheep. Their findings could one day help develop a similar system for human babies.

One of the biggest struggles for doctors to care for premature babies is to make sure they are getting the right amount of oxygen. Inside the womb, oxygen flows into their bodies via the placenta, but outside, their lungs are often not developed enough to maintain the necessary balance. Doctors ventilate these babies, which brings them the oxygen they need, but the process also delays lung development and can cause chronic lung issues later in life. Efforts to create an “artificial placenta” that can bring the right balance to newborns have so far not been successful—the techniques would contaminate test subjects with bacteria, or would have interrupted access to their veins, causing spasms.

“This [system] in theory should allow support the premature infant for a period of weeks, and therefore reduce dramatically its mortality and morbidity and improve outcomes both short- and long-term,” said Alan Flake, a fetal surgeon at the Children’s Hospital of Philadelphia and one of the study authors, in a press briefing.

The researchers tested a few different techniques to maintain oxygen in premature sheep. The system that was most successful, according to a study published Tuesday in Nature Communications, had amniotic fluid pumped in and out of a closed environment to prevent bacterial contamination—photos in the study look like the lambs are zipped into big plastic bags—that was padded and heated to mimic the womb. They placed a probe inside the umbilical cord to provide oxygen, the way the lambs would get oxygen in utero, but left it to their hearts to move that oxygen throughout their bodies instead of using a pump as previous efforts have done. The researchers named their system the Biobag.

They tested their technique on eight newborn lambs, born after a time analogous to earlier than 23 weeks for humans (a normal human pregnancy is about 40 weeks). In the Biobags, the lambs survived for four weeks, longer than any comparable experiments. The lambs’ brains and lungs appeared to develop normally, in contrast to comparable attempts that slowed the infants’ growth, the researchers note. Once they were delivered from the bags and put on ventilators, most of the lambs were humanely euthanized for the purposes of the study, but a few survived; the eldest is now a year old and seems to be like any other normal lamb, the researchers note.

If this type of system is someday used on humans, it’s unlikely that it would be useful for all premature babies, the researchers said in a press briefing. It would only work for babies born by C-section for fear that the bacteria coating babies delivered vaginally could contaminate the system. It also might not be able to be used on babies younger than 23 weeks; “I think that it’s certainly not our goal to extend the limits of viability,” Flake said.

There are still questions to answer before this kind of technique could be applied broadly to human babies. Baby lambs are pretty similar to baby humans, but researchers would have to calibrate the flow of amniotic fluid and oxygen for the specific needs of infants, which are slightly smaller. Lambs are also not a very good model to predict the likelihood of brain hemorrhage, one of the big risks for premature babies, but some of these questions can’t be answered until the researchers test their system in humans. The scientists also anticipate that there could be some perception issues—parents probably wouldn’t like to see their baby sealed in a plastic bag, though, the researchers note, we’re getting more accustomed to seeing babies in utero thanks to new imaging techniques, and it might be less stressful for parents to see their babies in Biobags than in the current NICU environment.

The researchers are currently working with the FDA to perform another animal study in anticipation of clinical trials, which they hope to being in three to five years.