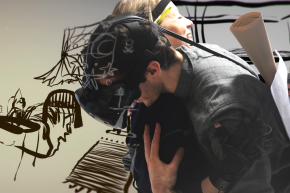 How Live Theater Could Reinvent Itself With Virtual Reality

Virtual reality experiences usually consist of short films and gaming that transport us to crazy worlds, but London’s National Theater is reinventing the narrative by combining a live-action actors’ performances with 3-D animation.

Debuting at the Tribeca Film Festival, “Draw Me Close,” a VR experience coproduced by the National Theatre (NT) and the National Film Board of Canada (NFB), tells the story of the relationship between director Jordan Tannahill and his mother after she was diagnosed with terminal cancer. The first chapter of the play, which is told in VR, allows the audience member to experience the memories of Tannahill as a 5-year-old inside a live, illustrated world.

“’Draw Me Close’ is an immersive, animated memoir that invites audiences into my still-unfolding relationship with my mother, now entering its final chapters as she nears death,” Jordan Tannahill, the director of the project, said in a statement. “It’s a journey that began 28 years ago; one that is filled with many battles, quiet triumphs, and lingering questions.”

The VR experience starts like all others do. You put on your headset, sensors on your hands and walk around to explore the virtual world. Then, an actress who is in the room with you, narrates the story in real-time and guides you through a theater set, in which you interact with the windows, floors and doors — everything that happens in the VR experience is happening in real-time.

“The actor is delivering the same performance but chemistry and dynamic is always slightly different — everyone has a different memory, everyone has different experiences with their parents,” Johanna Nicholls, producer of the project from the NT, told Vocativ.

The actress, whose touch is warm and comforting, makes you feel as if you were interacting with your own mother. She gives you hugs, gently walks you to your room and even tucks you in bed and sings to you in a soft, charming voice.

Along with the narrative and acting being very genuine, the illustrations also help contribute to the personal and familiar feeling of the experience. Teva Harrison, who drew the entire experience within VR using Google’s Tilt Brush, said this project is easy to connect to because of how personal it is to the creators.

“It’s really personal to Jordan because his mother has metastatic breast cancer, and so do I,” Harrison said. “That’s one of the reasons it was very meaningful for me to work on this project.”

The illustrations might be simple, but it being black and white, and stripped down, really help the audience member focus on the narrative and the interactions that are happening in real-time.

The NT and NFB have are currently trying to figure out what’s next in the storyboard for “Draw Me Close,” but they’ll keep working on it with Tannahill. David Oppenheim, producer of the project from NFB, said this will definitely not be the last experience of its kind and hope other groups keep exploring this type of narrative. In fact, in 2016, the National Theater opened up its own virtual reality storytelling studio.

The installation will be at Tribeca Film Festival’s Virtual Arcade space until April 29th along with other interactive and immersive VR experiences from filmmakers and visual artists.