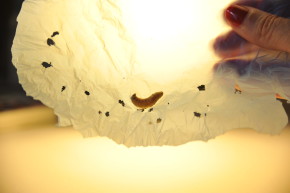 Plastic-Eating Caterpillar Could Chow Through A Big Waste Problem

Humans use as many as a trillion plastic bags every year, with much of that plastic ultimately destined to spend centuries slowly biodegrading in a landfill. Now an accidental discovery by a Spanish biologist—and, more importantly in this case, an amateur beekeeper—may have found the perfect critter to speed this process up and save us from our plastic problem.

In recent years, researchers have made several efforts to find bacteria that can break down plastic quickly. The results have been okay, with certain microbes able to make decent progress biodegrading plastic over several weeks or months. But Federica Bertocchini of the Institute of Biomedicine and Biotechnology of Cantabria happened upon much faster eaters when removing caterpillars known as wax worms from the honeycombs of one of her hives. She briefly put some of these pests in a plastic shopping bag, only to discover the worms had opened up several holes in the bag.

Writing in Current Biology, she and her fellow researchers report that, in a controlled experiment, 100 wax worms took just 40 minutes to open up holes in the bag, with each worm creating between one and three holes per hour. In just that short stretch of time, the bag’s mass reduced by 92 milligrams — which may not sound like a whole lot, but consider the previous record for bacteria was just 0.13 milligrams per day.

“What allows the wax worm to degrade a chemical bond not generally susceptible to bio-degradation?” the researchers ask in the paper. “The answer may lie in the ecology of the wax worm itself. They feed on beeswax, and their natural niche is the honeycomb; the moth lays its eggs inside the beehive, where the worms grow to their pupa stage, eating beeswax.” The beeswax contains some of the same hydrocarbon compounds found in plastic bags.

While it’s fun to imagine unleashing an armada of these plastic-chomping caterpillars in the world’s landfills and oceans, the biologists have a slightly more plausible idea in mind with this discovery. If the wax worms possess a particular enzyme that allows them to digest the plastic, then it would be possible to mass-produce that chemical, giving us a chance to tackle the plastic problem on a global scale.