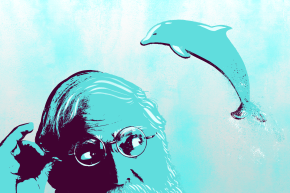 How do male and female dolphins fit together? Now the world knows

Sex research has long focused on the male side of pleasure at the expense of women, and it turns out that bias isn’t limited to the human corner of the animal kingdom. Past studies of dolphin sex have also apparently looked at the male’s penis without much consideration of the vital role the female dolphin’s anatomy plays in cetacean intercourse.

That’s now changing, and all it took was two researchers willing to simulate dolphin sex to understand just how the creatures’ reproductive organs work together. Marine researchers Dara Orbach of Dalhousie University and Patricia Brennan of Mount Holyoke University presented their research Sunday at the Experimental Biology 2017 conference in Chicago. Based on watching videos of bottlenose dolphin sex and their own experiments, the researchers concluded that the tip of the penis has to navigate around the female’s single vaginala fold to result in pregnancy.

They had obtained sex organs from adult bottlenose dolphins that had died of natural causes and inflated the preserved penises to full erection inside the vagina tissue samples. The goal was to see how deeply the penis penetrated the vagina and what parts of the female anatomy it interacted with. This is one of the first studies to consider both organs at once, allowing the researchers to get a better sense of how dolphin sex organs evolved in tandem.

Orbach and Brennan used CT scans and silicone models of the vaginas to reveal more of the intricacies of dolphin intercourse, which must deal with all the challenges of needing to have sex in the open ocean. The dolphin penis, for instance, has to be able to conceal itself when not in use so that its drag doesn’t slow down males while swimming, and female dolphin anatomy has evolved to keep seawater out of the uterus.

Because dolphin reproduction takes place in such a naturally extreme environment, studying successful wild copulation could eventually aid the efforts of captive breeding programs. And hey, even if those efforts don’t result in any more pregnancies, the female dolphins would likely be grateful for the more careful attention.