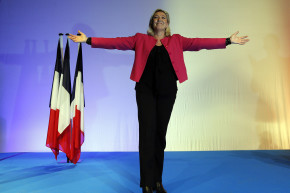 In an outcome that would have seemed unthinkable just a few years ago, far-right populist Marine Le Pen completed her transition from fringe to mainstream, coming in second in Sunday’s French presidential vote — after which she’ll head into a final run-off vote against frontrunner Emmanuel Macron.

While there is a combination of ingredients as to why Le Pen’s recipe for success has her on the brink of the French presidency, one of the core elements is her undeniable popularity on social media. With more than 1.4 million followers on Twitter and about 1.39 million on Facebook, Le Pen’s reach dwarfs Macron’s – doubling his following on Twitter and boasting a Facebook following four times the size of his.

Her rise online is the latest example of how Facebook and Twitter are playing at least a partial role in helping elevate unlikely political candidates — and the sometimes controversial messages they bring. After Trump’s win, Facebook was loathe to admit the overwhelmingly pro-Trump “fake news” that proliferated on its platform could have swayed the outcome of the election. But after the election, Facebook put together a targeted effort to filter out content lacking credibility.

Still, the rise of nontraditional, and sometimes fringe, candidates or movements isn’t just due to the proliferation of “fake news.” A Vocativ analysis of the Facebook pages of political figures and parties in France, the United Kingdom, and Germany shows that those political figures who are on the edges of the traditional political map have found it to be easier to stand out and gain support.

For instance, in the month leading to the first round of the 2017 French presidential elections, posts from the official pages for Le Pen and far-left candidate Jean-Luc Mélenchon were shared 474,000 times and 643,000 times, respectively. Those numbers dwarfed posts on the official pages from Macron and conservative candidate François Fillon, which were shared only 134,000 times and 279,000 times, respectively. This advantage, which is shown by more followers for a given page, is translated to an advantage in the ability of spreading the message, represented by more post shares. To some extent, these louder voices allow to amplify more radical stances, and the people behind them, while minimizing the reach of more nuanced positions.

In the United Kingdom, the most popular political party on Facebook would be “Britain First,” a far-right movement formed in 2011 by former members of the British National Party. Though the party has not won a single campaign for public office, it managed to establish a fairly significant audience on social media, with more than 1.8 million Facebook followers – the highest following among all Facebook pages for a British party, such as the Liberal Party, the Labour Party and the Conservative Party, or political figure. British Prime Minister Theresa May, leader of the Conservative Party, has a little more than 355,000 followers on her Facebook page, which looks modest compared to Jeremy Corbyn, leader of the Labour Party, who has close to 850,000 followers on Facebook. Their parties’ official pages are also falling short of “Britain First.”

A look at the Facebook content of “Britain First” might explain its advantage. Most of the posts are dedicated to xenophobic and anti-Muslim messages and videos. In the last month, the most popular post on the page was a March 24 video of what looks to be an elementary school teacher in Iraq violently assaulting students, titled, “IN THE NAME OF ISLAM CHILDREN ARE BEING ABUSED!” As of April 24, the video has been viewed more than 14 million times and has more than 184,000 shares, 26,000 reactions and 16,000 comments.

The page administrators failed to mention that the video first appeared online two years ago and caused an outcry in Iraq. Meanwhile, the most popular posts on May and Corbyn’s respective Facebook accounts during the past month dealt with May’s announcement on the early elections, which was shared less than 10,000 times. While “Britain First” superiority does not necessarily mean that all Facebook users are more exposed to its posts, the wide discrepancy signals that the party’s content is more accessible, likely to go viral, despite the fact it is a fringe party.

In Germany, while Chancellor Angela Merkel maintains the largest Facebook following among the country’s individual politicians, the populist right and left are leading the way for the nation’s political parties. Founded in 2013, AfD (Alternative For Germany) managed to attract the biggest crowd on Facebook among German parties by pushing its anti-EU sentiment. Though the party has no seats in the Bundestag, the German Parliament, its nearly 321,000 followers are enough to make it the biggest political party page in Germany. Merkel’s Christian Democratic Union Party (CDU) and its main rival, the Social Democrats (SPD), are lagging behind, each with less than 150,000 followers. The left-wing populist party Die Linke and Die PARTEI, a party that was founded by editors of a satirical magazine and has one seat in the European Parliament, have more followers on Facebook than the more mainstream parties. An analysis of the growth of AfD’s Facebook audience shows a sharp increase during the last quarter of 2015, when the migrant crisis erupted in Europe, and during the first quarter of 2016, ahead of elections in three states in Germany, which were pretty successful to the AfD. Though the party is seemingly struggling to maintain momentum leading into this fall’s election, the party is maintaining its dominance on social media.

So, while most people are fighting “fake news,” the mainstream parties in France, the U.K. and Germany continue to fight from behind, at least online.