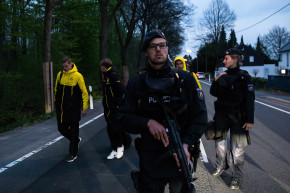 Germany’s anti-terrorism unit has arrested a 28-year-old German-Russian man disclosed only as Sergei W. for the April 11 bombing of a bus carrying European soccer powerhouse Borussia Dortmund in what unexpectedly is thought to be a financial crime, rather than an ideological one.

Prosecutors told reporters that the man hoped to short team stock by driving down its price in the wake of the attack. He apparently bought 15,000 options the day of the bombing that would have allowed him to sell at a predetermined higher price even if the shares’ value plummeted.

“The man appears to have wanted to commit murder out of greed,” Ralf Jager, the North Rhine-Westphalia state’s minister of the interior, said, according to ESPN FC.

Sergei W. booked the same Hotel L’Arrivee as the team, according to prosecutors, and reportedly was adamant that he receive a room with a window facing the front of the hotel. Gallingly, Bild newspaper reported, in the chaos of the bomb detonations, he nonchalantly entered the restaurant and ordered a steak.

The suspect is said to have detonated three bombs and written three forged notes claiming responsibility for the attack by Islamic terrorists—the authenticity of those letters was quickly dismissed, leading investigators to consider far-right and far-left groups before arresting Sergei W. in just 10 days’ time. He will be charged with attempted murder, among other charges, for the bombing which injured one police officer and one player, Marca Barta, who had surgery to repair a fracture in his forearm. Borussia Dortmund is best known in the States as the club that employs teenage wunderkind Christian Pulisic, who stars for the U.S. national team.

A spokeswoman for the prosecutors, Frauke Koehler, said at a news conference that the alleged perpetrator had taken out a loan for tens of thousands of euros prior to the attack. “We were put on to the suspect’s tracks by suspicious option deals,” she said. “He in total bought three different derivatives and gambled on falling stock prices. He bought the majority of the derivatives on April 11, the day of the attacks.”

Prosecutors determined the stock purchases were made from the hotel’s IP address. Bild estimated that he stood to gain around $4 million had his plan succeeded and reported that the man had won a prize for his electronics and engineering skills in 2005, suggesting he was capable of creating such a bomb.

Borussia Dortmund is the only club in Germany’s top division to be listed on the stock exchange, an unusual arrangement replicated in major North American sports only by the Green Bay Packers, who are a publicly traded company without a majority owner. For what it’s worth, shares for Borussia Dortmund traded at 5.75 on April 10, dipping to 5.5 on the day of the bombing and slipping to 5.38 on April 20, but have rebounded to 5.52 as of the afternoon of April 21. Five years ago, the shares traded as low as 2.11.

The club’s match against AS Monaco had been postponed one day, which they lost 3-2, and then were defeated again, 3-1, in a rematch a week later. Borussia Dortmund coach Thomas Tuchel said his players suffered from the mental trauma from the quickly re-scheduled match.

“That was the decisive factor for Monaco,” he said, per German news outlet Deutsche Welle. “We held our own against our opponent but they were playing with freedom. Our team, on the other hand, were thrown completely out of their frame of reference.”

After news of the arrest was announced, Tuchel said, “If the motive has been identified that would help us a great deal to process it.”