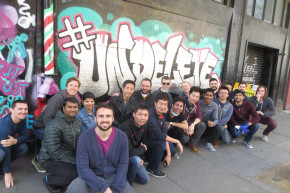 Could this be Uber’s new campaign?

Uber has been the target of bad publicity for the past year, but as the company tries to restore its reputation, its employees seem to be helping in the exact wrong ways.

A group of 20 or so Uber employees recently went on a graffiti workshop in San Francisco to help create a custom mural on a random wall. While the activity seems fun and harmless, the message they wrote is controversial: In big white letters, it reads “#Undelete.” That’s a response to the #DeleteUber campaign, which began trending in January, after the company was accused of sexism and support for President Donald Trump’s administration.

The employees had the help of 1AM, short for First Amendment, a group that supports graffiti writers and other artists in the Bay Area. The artist support group also hosts workshops with tech companies, including Uber.

The tone-def mural was painted on April 10, but photos of the wall were recently discovered by The Verge. The photos show that the actual spray-painting was done by a professional graffiti writer, but the Uber employees helped set it up and also posed in front of it.

Uber has yet to comment on the mural, but the company wants to kick start a campaign, this might prompt even more negative backlash.