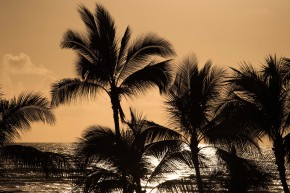 The attorney general dismissively referred to Hawaii as "an island in the Pacific" after a judge who lives there ruled against President Trump's travel ban.

After Attorney General Jeff Sessions made the decision to disparage a state in the country over which he is the chief law enforcement officer, residents of that state (along with a few folks who just relished the chance to get in a dig at Sessions) weighed in on Twitter.

Sessions, in a talk radio interview about the U.S. federal judge serving in Hawaii — who was one of the judges who blocked President Trump’s second attempt at a travel ban — had this to say: “I really am amazed that a judge sitting on an island in the Pacific can issue an order that stops the president of the United States from what appears to be clearly his statutory and Constitutional power.”

Yes, despite being stranded on an “island in the Pacific,” Hawaiians were somehow able to access the internet to make their feelings known.

First up, all four of the state’s (Democrat) representatives in Congress, who were livid:

Hey Jeff Sessions, this #IslandinthePacific has been the 50th state for going on 58 years. And we won’t succumb to your dog whistle politics

Mr. Attorney General: You voted for that judge. And that island is called Oahu. It's my home. Have some respect. https://t.co/sW9z3vqBqG

State of Hawaii has many islands, not one island. We have around 1.5 m people. Island of Hawaii has 186,000 people. Please use the google. https://t.co/aoZewx7jzT

Try: "I'm sorry. That was offensive. I disagree with the ruling, but I respect the judiciary and shouldn't have taken such a cheap shot." https://t.co/aoZewx7jzT

This included Rep. Tulsi Gabbard, who famously met with President Trump shortly after he was elected president (and is no fan of Sessions):

Amazed @USAGSessions doesn’t know Hawaii is a State, not just an "#IslandinthePacific." Another reason Sessions should step down.

Our 50th state #IslandinthePacific is home to the only US WWII battlefield at Pearl Harbor. AG Sessions, have some respect.

And now, the rest of Hawaii erupts:

We do realize Hawai'i is more than one #islandinthepacific right? …Right? There's eight…

@jeffsessions we also use coconuts and mangoes as currency here. #IslandInThePacific

I was born on "an island in the Pacific" in 1958, the year it became a state. It's a wonderful place to call home. #IslandInThePacific https://t.co/p0UR6doAa3

@BraddJaffy Well, sure, Hawaii has been a state since 1959, but in Sessions defense, he is still living in 1950. #IslandinthePacific

We're amazed that a racist from Alabama can become Attorney General. So guess we're even.#IslandinthePacific https://t.co/D8pPCTGuCX

Sessions: Hawaiians aren't real Americans because a lot of them are brown #IslandInThePacific

I was born an raised on that #islandinthepacific and Jeff Sessons isn't invited.

@tedlieu Stay FAR away from this island @jeffsessions! We no like your kine. #islandinthepacific

@AtghIgov I work on Maui where 90% of my customers r Korean & Vietnam war vets. We r the 50th state!#islandinthepacific #proudHawaii #showsomerespect

I'll note for Jeff Sessions' benefit that the #IslandInThePacific, unlike his home state of Alabama, never tried to LEAVE the United States.

Some Hawaiians pointed out that being a state hasn’t necessarily been in their best interests:

Hey @JeffSession get your boss to secede this #IslandinthePacific so we can have our sovereignty back then you can go try that ban again.

AG Sessions: this #IslandinthePacific has endured some of the most appalling environmental & cultural destruction because we are a state

Lol love when American society forgets we are apart of the states. How can u forget about an island you illegally took #IslandInThePacific

Over at Hawaii reddit, one redditor pointed out that Hawaii’s diversity was once a sticking point for several Southern congressmen, and possibly still is for the former Alabama senator:

Comment from discussion Sessions ‘amazed’ judge ‘on an island in the Pacific’ halted Trump travel order.

The Department of Justice responded to the criticism by noting that one of Sessions’ grandchildren (who he has been accused of using as props before) was born in Hawaii. It then went on to misunderstand how the federal court system works, as well as how many islands make up the state of Hawaii:

Hawaii’s Attorney General, Doug Chin (who brought the lawsuit against Trump’s executive order that led to the Island in the Pacific judge’s decision), helpfully explained what the judicial branch is and does:

Hawaii AG Chin notes "the Constitution created a separation of powers for a reason" in responding to Jeff Sessions. https://t.co/qkHtyQX8eE

And reminded Sessions that Hawaii is, in fact, a state:

Sessions’ decision to belittle a federal judge who was nominated by the president and unanimously confirmed by the Senate (which, at the time, included Sessions) as simply “a judge sitting on an island in the Pacific” is consistent with the current administration’s dim view of the judicial process when it makes decisions it does not agree with. In February, he attacked a judge from the USA who ruled against his travel ban:

The opinion of this so-called judge, which essentially takes law-enforcement away from our country, is ridiculous and will be overturned!

What is our country coming to when a judge can halt a Homeland Security travel ban and anyone, even with bad intentions, can come into U.S.?

Because the ban was lifted by a judge, many very bad and dangerous people may be pouring into our country. A terrible decision