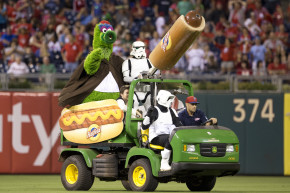 The War On Mascots Is Upon Us
By Joe Lemire

The War On Mascots Is Upon Us

Sign me up, Noah Syndergaard, for your War on Mascots, a noble crusade to antagonize the furry cartoon creations that have remained an unchecked scourge on the sporting landscape for far too long. (And, for that matter, I’m all in on your “Ban the Wave” campaign, too.)

The Mets’ ace recently pulled his own prank on the Phillie Phanatic by stealing his ATV for a Citizens Bank Park joyride and then declared war after seeing the game’s greatest talent, Angels outfielder Mike Trout, fall victim to the trickery of the Astros’ mascot, Orbit, who’s cut from a similarly oversized, green-tinted, wide-waisted cloth as the Phanatic. I even have it on good authority that an old Phanatic costume is the smelliest artifact in the Baseball Hall of Fame collection.

This is what they do to the AL MVP people. The War of the Mascots is upon us. Prepare yourselves.https://t.co/FiidPD0VMg

@Noahsyndergaard Rare footage of the Phanatic training for The War of the Mascots: pic.twitter.com/xoNVmnwbW3

@Phillies We all know who won that first battle pic.twitter.com/8B2sx6VD7I

@Noahsyndergaard That's fair. We just want to make sure you're completely aware of what you're up against. pic.twitter.com/2Mm8gnBEpp

This madness needs to stop. My own distrust and disdain for mascots is deep-seated, dating back to July 1995. My extended family took a road trip from our Massachusetts home to Montreal for a pair of Braves-Expos games because my grandfather, who had pro baseball tryouts prior to his Purple Heart-winning service in World War II, had kept up his Boston Braves fandom thanks to the national TBS broadcasts from their new home in Atlanta.

During the second of our two games, I stood up to cheer something on the field and all of a sudden I felt my hat get ripped off my head. I turn around and, I remember this vividly, at first all I saw was orange. Just the color. Within a second I realized what was going on: Youppi, despite his being a gigantic mascot whose every step was cheered, had somehow slipped quietly behind me and snagged my Braves hat off my head. (In my defense, I was intently keeping score.)

Youppi, whose fragile self-esteem requires an exclamation point in his name that we are not including here because screw him, faced the section of fans behind us, held it high, and pointed to the hat, which prompted 1,000 Expos fans to boo me. I was 13 years old with big glasses and, I can admit now, more than a bit nerdy and awkward, so this was rather traumatizing at the time. When the booing subsided, Youppi turned my cap inside out and slapped it back down on my head, before heading off to prey on some other Braves fan.

I wish the story ended there, but apparently my general countenance attracts prey-seeking mascots. At a Tampa Bay Devil Rays in May 2004, I was sitting with my arm around my college girlfriend, when I felt a force pry my hand off the back of her chair. Swiveling back, I faced my new fuzzy blue nemesis, Raymond, who dared to get between us.

I challenge you to #LightTheTorch for #SpecialOlympicsFlorida with a #selfie at your favorite @Publix. pic.twitter.com/QzCKTQSM2E

The previous day, no less a character than Mickey Mouse engaged in similar antics, making a “call me” gesture to her with his white-gloved hand when I had my back turned. Yes, even Mickey turned on me. So susceptible to caricatured villains was I that, a year later, even a short-season minor league mascot—SouthPaw, the Tri-City Valley Cat— twirled his finger by his ear in the international sign for “crazy” as he nodded in my direction.

These purportedly kid-friendly creations are not driving entertainment but haunting guests. Just look at the creepiness of this mascot list. Or shudder at the sight of this horde:

Those are our enemies. It’s time to heed Syndergaard’s call and purge sports of this mascot plague.