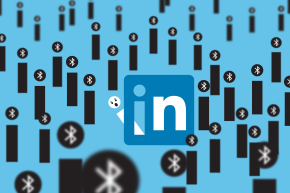 LinkedIn Apologizes For Trying To Connect Everyone In Real Life

App's warning that it would passively 'make data available to nearby Bluetooth devices' was in error, company says

It’s bad enough to be reminded how often people want to add you to their network on LinkedIn. But what if they start pestering you in public, too?

LinkedIn has apologized for a vague new update that told some iPhone users its app would begin sharing their data with nearby users without further explanation.

The update prompted outrage on Twitter after cybersecurity expert Rik Ferguson received a strange alert when he opened the resume app to read a new message: “LinkedIn would like to make data available to nearby Bluetooth devices even when you’re not using the app.”

That gave Ferguson, vice president of research at the cybersecurity firm Trend Micro, a handful of concerns, he told Vocativ. Among them: “the lack of specificity, which data, when, under what conditions, to which devices, why does it need to happen when I’m not using the app, what are the benefits to me, where is the feature announcement and explanation, why wasn’t it listed in the app update details.”

A mobile app asking for additional permissions isn’t a novel occurrence, but broad requests are often met with skepticism from privacy advocates and security researchers. Many shopping apps, for instance, leave a user’s bluetooth connection turned on, allowing marketers to track you as you enter a store and linger near certain products.

Reached for comment, LinkedIn said it’s a mistake — that some iPhone users were accidentally subject to undeveloped test feature the company is still working on. When it’s deployed in earnest sometime in the future, it won’t even ask users to enable Bluetooth, spokesperson Tatiana De Almeida said.

“We are working on a fix immediately and we apologize for any confusion,” she told Vocativ.

Of course, that still doesn’t solve the underlying problem: The future will likely still contain some version of LinkedIn users walking around, phones out, searching to connect with each other in real life.