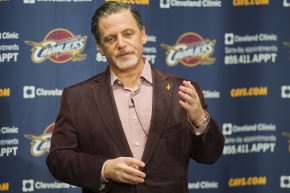 Dan Gilbert Sabotaged His Shot At Getting Public Money

Dan Gilbert’s quest to secure millions in public dollars in order to install glass walls at Quicken Loans Arena—among other fancy doodads and knick-knacks—may have run into a potential stumbling block: Dan Gilbert.

As Cleveland Scene reported, last week, the Cleveland City Council voted 11-6 to give preliminary approval to Ordinance 305-17, which would generate $88 million via an increase in future admissions taxes at the arena. The final vote was expected to be held on Monday. It was not, and here’s where things got weird.

City Council President Kevin Kelley pulled the measure from the agenda, even though it was expected to pass, telling Cleveland Scene he did so because, “some members requested more time to discuss it.” Kelley didn’t specify which councilpersons might be waffling, but a source at City Hall told Cleveland Scene that an increase in public outcry meant some yes votes might not be as rock-solid as previously thought.

Gilbert and his partners very much wanted to get to 12 votes, or two thirds of the total council. Why? If they do, the ordinance would pass as an “emergency” measure, and therefore would be implemented immediately and not subject to a voter referendum. Thing is, that may not be possible even if Team Glass Walls were able to secure a supermajority.

Emergency ordinances are exempt from the possibility of referendum only if they are passed “for the immediate preservation of the public peace, property, health, or safety and providing for the refinancing of bonds, notes or other securities of the city.” And because the county is issuing the bonds, not the city, 305-17 should not be exempt.

Odder still, Dan Gilbert personally called a councilmember to try to elbow him into the yes column and it backfired. Before he arrived at city hall, Councilman Zack Reed, who previously voted no, was on the phone for an hour with an individual he described as a “trusted adviser” of Gilbert’s. Reed was unmoved, so Gilbert got on the line, yammering away for an additional 40 minutes.

Reed was angered by this full-bore effort, one that, according to Cleveland Scene, represented the first time Gilbert himself tried to move the needle.

“I’ve said all along that if I’m going to vote on this deal, I need something for my neighborhood, for Cleveland’s neighborhoods. I’m not opposed to a deal. I’m opposed to this deal,” he said.

While talking with Gilbert, Reed mentioned the demands made by Greater Cleveland Congregations, a non-partisan group of religious leaders and over 100,000 residents. The group has been protesting the giveaway to Gilbert, stating that if taxpayer dollars are to be given to a billionaire, the least he could do is pay $35 million into a fund that would benefit the community. The group even traveled to Detroit to personally deliver their message to Gilbert.

Per Reed, he suggested that should Gilbert be willing to talk about a community development fund, it might make him change his mind. Gilbert, who has never commented on Greater Cleveland Congregations or the protests before, refused to consider it, asking if there was anything else Reed wanted.

So Gilbert might have been able to convince one politician to abandon his constituents and deliver the yes vote he wants, even if that yes vote wouldn’t have stopped the ordinance from facing a referendum. Instead, because he stubbornly refused to have a conversation about a community development fund, one that even with Gilbert’s endorsement is in no way guaranteed to become a reality, Gilbert and other team representatives’ lobbying is now out in the open.

We’re a long ways away from the tide turning here. The measure will in all likelihood pass eventually and a public vote against it isn’t a given. But a groundswell of citizens and politicians speaking out while the wealthy and powerful try to game the system in smoky back rooms is just the kind of imagery that tends to sway the larger voting populace. And yes, it’s worth recalling that when Gilbert doesn’t get exactly what he wants, he’s prone to self-sabotaging, impetuous decisions.

Meanwhile, in addition to the five NFL owners who ponied up more than $1 million to help fund Donald Trump’s bloated inaugural, Gilbert, via his Detroit-based development company, gave $750,000.