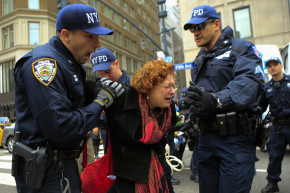 Cops are more dangerous than fireworks

A woman is detained while attending a October 2015 protest against police brutality in NYC — AFP/Getty Images
By Ed Cara
Apr 20, 2017 at 2:54 PM ET

For all the protests and outrage that incidents of police brutality have stoked from the public, there is still a wide gap of data showing how often our encounters with police take a turn for the worse.

Researchers and journalists alike have begun to meticulously measure how many people are killed by police, but there’s much less attention paid to how many people they injure. A short new study published Wednesday in JAMA Surgery may be our best estimate yet.

Researchers studied data from the Nationwide Emergency Department Sample, which records the details of some 30 million visits to the emergency room annually. These visits in turn represent the more than 130 million visits estimated across the country every year. Over the years 2006 to 2012, they estimated that around 51,000 visits related to “contact with law enforcement” had occurred annually.

For context, the tally outnumbers annual visits caused by things like fireworks, playing certain sports, and domestic violence; as well as the number of annual injuries incurred by police officers while on duty. Compared against other research looking further back in the past, though, the number of visits hasn’t changed much from year to year in quite some time.

“While public attention has surged in recent years, we found these frequencies to be stable over 7 years, indicating that this has been a longer-term phenomenon,” the authors wrote.

Of the visits, more than 80 percent involved men, most of whom lived in poorer and urban neighborhoods, and were more likely to take place in the South and West parts of the country. Patients were also more likely to reportedly be dealing with substance abuse and mental illness. Most injuries were caused by being struck, with less than 7 percent involving stab or gunshot wounds. 0.3 percent, or 1,202 visits, ended in death.

By providing a more up-to-date record of police-related injuries, the researchers hope it can “serve as a baseline to evaluate the outcomes of national and regional efforts to reduce law enforcement-related injury.”