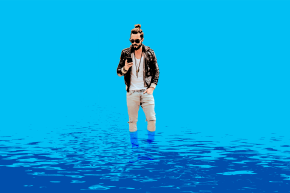 Your Selfie Is Drowning: App Snaps Your Photo In Climate Change Future
By Alasdair Wilkins

Your Selfie Is Drowning: App Snaps Your Photo In Climate Change Future

Climate change threatens to reshape the planet over the coming century, and few changes are quite as dramatic as the prospect of rising sea levels. The new app After Ice uses NASA climate projections and augmented reality to take this distant danger and give users a sense of what it would their world will look like after the ice melts.

Visual artist Justin Brice Guariglia got the idea for the app while accompanying NASA climate scientists on their research flights over Greenland’s ice sheets. Hoping to give people a more tangible sense of what global sea level rise would mean for the planet, Guariglia helped design After Ice, which lets users take selfies and see overlaid on the screen just where water levels might someday be in their city. He told Vocativ that the app is intended to make comprehensible a topic that is otherwise too big and too distant for humans to really grasp.

“You can’t really experience sea level rise. It’s happening too slow to see and too fast to ignore,” said Guariglia.  “Humans are not evolved to understand and grasp something like global warming or sea level rise or an ice sheet… These are things that exist on temporal and spatial scales where humans just didn’t evolve to think about these things.”

The app pulls from NASA’s climate data to provide users with different potential scenarios. The first shows what would happen if all the ice on Earth were to melt — not something expected to happen anytime soon, but also not impossible — which would cause seas to rise more than 250 feet. The second, nearer-term possibility is what the world will look like in the 2080s, by which time NASA projects the seas will have risen several feet, depending on how near the poles a person is.

Such a rise would be catastrophic for those living near the coasts, but the impact might not be quite as visceral for those taking their selfie in, say, Iowa. To that end, the final part of After Ice shows places users in the Financial District of New York City, which could be underwater by the 2080s without serious efforts to curb climate change (or, failing that, people building some Dutch-style dyke systems to keep the higher waters out of the city).

After Ice is just the most public aspect of Guariglia’s larger artistic efforts on global warming and sea level rise.  “What any artist hopes is to move somebody and make somebody feel something,” he said. “I hope that they would take some action — it would be good for everybody in the world! — and that’s what I want to do. I want the app to get questions asked, to get conversations started.”

To help spread the word about sea level rise, the app encourages users to share their watery selfies on social media. People can also show their neighbors what the future holds by putting up this poster warning of future flooding, with the app giving users the data to hang it at just the right height to reflect NASA’s projections.

After Ice is now available for iOS in the App Store.