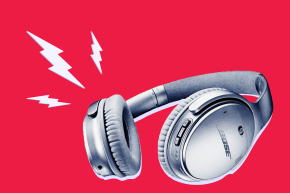 Kyle Zak, a Bose customer who had used the company’s QuietComfort 35 headphones, filed this suit after finding out the smartphone app he downloaded for use with them was sending his data to third parties. This app, which is not necessary for standard use but gives users full functionality of the products’ capabilities, ties users’ listening data to their name, email address, and headphone serial number, the suit said. Among the third parties Bose allegedly passes this information off to is Segment, a data mining company.

Zak and his lawyer allege that this usage of customer data violates the Wiretap Act and other state privacy laws.

“One’s personal audio selections – including music, radio broadcast, Podcast, and lecture choices – provide an incredible amount of insight into his or her personality, behavior, political views, and personal identity,” the complaint reads, citing scientific that link music viewing to personality, demographics, and even medical conditions.

The complaint also notes how podcast listening habits could be incredibly revealing, using a HIV/AIDS podcast, a Muslim call to prayer podcast, and a podcast for closeted members of the LGBTQ community as examples.

“Companies need to be transparent about the data they take and what they are doing with it, and get consent from their customers before monetizing their personal information,” Zak’s privacy lawyer told Fortune.

A representative from Bose told Vocativ that the company does not have any comment in regard to the lawsuit at this time.

This lawsuit lists customers who have purchased the QuietComfort 35, QuietControl 30, SoundLink Around-Ear Wireless Headphones II, SoundLink Color II, SoundSport Wireless and SoundSport Pulse Wireless as being at-risk for having their data collected should they choose to use the device’s app feature.