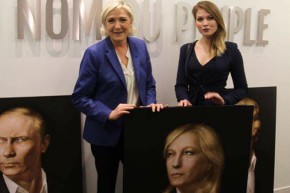 Maria Katasanova delivers a painting to Marine Le Pen — Facebook
By Shira Rubin with Tanya Bekker
Apr 20, 2017 at 10:48 AM ET

In a Twitter-storm straight from Paris, Maria Katasonova is representing her country’s love affair with the anti-EU French presidential candidate Marine Le Pen ahead of elections next Sunday.

In a Facebook post on Tuesday, Katasonova posted a photo of herself donning a shirt with Le Pen’s campaign slogan: Au Nom Du People, In the Name of the People. She’s proudly hoisting a picture of what she called the “triptych effect”: Russian President Vladimir Putin, Marine Le Pen, and President Donald Trump. She says they will bring “peace” to the world.

Last month, Katasonova gifted Marine Le Pen with life-size portraits of the three leaders, which she said were “prophetic.”

“On April 23, on the election day, we will hold a party in Moscow with a live broadcast of the results, because we are assured that Marine Le Pen will win this day,” she told Le Pen, after presenting her with the portraits. Before that, “we will try to do everything on the internet that we can do to support you.”

Katasonova, 21, is the assistant of Yevgeny Fyodorov, a far-right member of the Rodina, or Motherland, party. An avid social media user, she’s posted photos and videos of protests in favor of Donald Trump, as she wore “crooked Hillary” t-shirt, in the runup to the U.S. elections.

She’s also been her party’s pretty, young face for Russia’s internationally-condemned crises. In 2015, when Russian military action in eastern Ukraine caused international outrage, Katasonova posted a Christmas Youtube video, in which she clutches a rifle and threatens global nuclear war if Russia loses the Ukraine conflict.

Russia has become increasingly expansionist in recent years, and deployed an “influence campaign” in the U.S. elections, according to U.S. intelligence services. Richard M. Burr, the Republican Senator of North Carolina and chairman of the Senate Intelligence Committee, told reporters last month that Russia is also apparently meddling in French elections.

“What we might assess was a very covert effort in 2016 in the United States, is a very overt effort, as well as covert, in Germany and France,” he said. “I think it’s safe by everybody’s judgment that the Russians are actively involved in the French elections.”

In regards to reported Russian efforts to meddle in elections in France, Katasonova responded, “Well, I suggest we do not disappoint our Western partners. Cyberarmy, are you ready?”

The French presidential elections will take place in two rounds on April 23 and May 7.

On March 24, Marine Le Pen, the firebrand leader of the far-right National Front party who is one of two front-runners, met with Russian President Vladimir Putin in a bid to increase her presidential optics ahead of the election.

“A new world has emerged in the past years. This is Vladimir Putin’s world, Donald Trump’s world in the United States, Mr (Narendra) Modi’s world in India,” she told reporters. “I am probably the one who shares with all these great nations a vision, once again, of cooperation and not one of subservience, not the hawkish vision that has too often been expressed by the European Union.”

Le Pen praised Putin as “a man committed to values,” and to “the Christian heritage of European civilization.”

Le Pen, who’s borrowed millions of euros from Russia, told journalists in Moscow that she and Putin did not speak of finances during the meeting. Putin also pre-emptively defended himself in a Kremlin-issued transcript, saying that Russia “by no means want to influence the current events. but we reserve the right to communicate with all representatives of all political forces of the country.”

Katasonova has repeatedly said that any negative coverage of Le Pen, Putin or Trump, are the work of a “deceitful media.” She says that she, like many young nationalists in Russia and around the world, believe in those leaders’ mission to distance themselves away from European liberalism and toward initiatives that return national pride.

“Globalization is an attempt by globalists and liberals to dictate to people how they should live,” she told Deutsche Welle earlier this month. “Now the political elite has become scared because, just like Le Pen says, patriots will unite against globalization.”

Three politicians that will bring peace to the world.

The pro-Europe candidate Emmanuel Macron has accused Russia of spreading false rumors in order to derail his campaign and for perpetrating cyber attacks on his team’s computer networks. The Kremlin has denied any involvement.

As part of Katasonova’s France social media binge, she posted a selfie of herself frowning and with a thumb down, in front of a magazine poster featuring Macron, under the English-language hashtag #DislikeMacron. As of Thursday afternoon, Vocativ found that around 1,200 had retweeted under the #DislikeMacron hashtag.

Translation: The French media is rolling out for Macron. He’s on every TV screen and his posters are stuck even on garbage cans. I suggest a “dislike for Macron” flash mob. Join us! #DislikeMacron