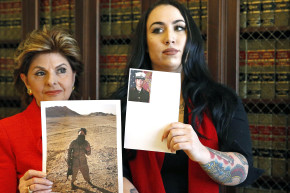 Marine Erika Butner said photos of her were put online without consent — AP
By Tracy Clark-Flory
Apr 19, 2017 at 4:41 PM ET

The Navy has effectively criminalized the non-consensual swapping of “intimate photos” following a recent nude photo-sharing scandal, according to NavyTimes. The new regulations were released Monday and go into effect immediately.

Last month, news broke that the U.S. Department of Defense was investigating hundreds of marines for using a private Facebook group to share naked photos of women, including female service members. The group, Marines United, non-consensually shared thousands of images, which were met with obscene commentary. Now, the Navy has released new rules that bar just that specific type of behavior.

The rules prohibit Navy and Marine Corps personnel from distributing “intimate images” with any of three aims — “to realize personal gain,” “humiliate, harm, harass, intimidate, threaten, or coerce the depicted person,” or “with reckless disregard as to whether the depicted person would be humiliated, harmed, intimidated, threatened, or coerced.” For the sharing to be outlawed, it must also be done “without legal justification or excuse” and when someone knows “or reasonably should know that the depicted person did not consent to the disclosure.”

As for how the rules define the vague category of “intimate images,” the text requires that the image show an identifiable person and depict them “engaging in sexually explicit conduct” or show their “private area,” and must have been “taken under circumstances in which the person depicted had a reasonable expectation of privacy.”

Previously, the Marine Corps attempted to squash the problem by releasing social media guidelines advising against “defamatory, threatening, [or] harassing” speech. But, as Vocativ reported, the nude photo-sharing continued, simply moving platforms from Facebook to Snapchat. These new rules, however, are much more consequential. As NavyTimes explains, they amount “to a lawful order, which can be enforced with the full weight of the justice system, from non-judicial punishment to general court martial.” Now, maybe, service members will think twice before they snap.