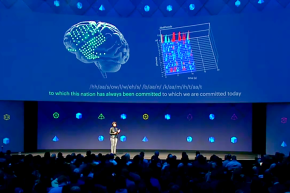 You'll never have to speak out loud again

Facebook knows a lot about us including our favorite music, friends, location. But soon, it hopes to also know what’s inside our head: The company’s Building 8 research group says it’s developing a brain-computer interface to detect a user’s thoughts and translate them into text.

The concept, which it talked about but did not demonstrate, seems quite creepy right off the bat, but unlike Elon Musk’s neural lace, Facebook’s interface wouldn’t require any implants inside the brain. Regina Dugan, head of Building 8, said this technology will use optical imaging (the use of light to look inside the body, as is done with x-rays) instead of any invasive gear.

Dugan made it a point during her on stage presentation at the F8 developers conference on Wednesday to stress that this technology is not about invading users’ thoughts, and she even acknowledge that it’s scary. Even with today’s technology, people are constantly concerned that tech companies are violating their privacy.

Facebook describes it’s new technology as a way to decode words that “you’ve already decided to share by sending them to the speech center of your brain.” Dugan also referred to the idea as a “brain mouse” that could change the way we interact with technology in a way similar to the computer mouse. Additionally, she said, this technology could serve as a “speech prosthetic” for patients with paralysis.

Researchers at Stanford University have already used the interface to create a system that allowed a paralyzed patient to type eight words per minute using her thoughts, but Dugan said the goal is to develop the system to where it can let people type up to 100 words per minute.

Building 8’s project was announced as a teaser, more than anything, so details on the technology are still pretty sparse. However, it’s known that the team of 60 engineers and scientists on-site are already working on a prototype device and even hiring for the project.