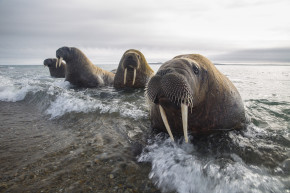 The Arctic Ocean Is Filling Up With People’s Plastic Waste

Once thrown away, plastic doesn’t just disappear — it can take centuries to biodegrade, after all — but it can end up in the most unexpected places, far from the humans who first used it. The Pacific, Atlantic, and Indian Oceans are all home to gigantic swirls of tiny plastic particles. Now an international team of researchers have found the same kind of massive plastic pollution in the icy remoteness of the Arctic Ocean.

A new paper in Science Advances estimates there are some 300 billion bits of plastic floating in the Arctic Ocean, totaling about 400 tons of debris — though the actual figure could be as high as 1,200 tons. Compared with the other plastic garbage patches, that actually isn’t so big. But the other oceans are all relatively close to billions of people, so it’s no surprise their patches would be larger. The plastic in the Arctic, on the other hand, is primarily found in the Greenland and Barents Seas, which are far from any major population centers. The plastic must have traveled huge distances to end up there.

The recent Tara Oceans expedition across the polar regions was able to sample plastic concentrations throughout the Arctic. While much of the polar waters remain more or less free of debris — there’s still enough frozen ice to block the northward movement of the floating plastic — parts of the Greenland and Barents Seas had as many as hundreds of thousands of pieces per square kilometer.

Not that you could drop a net into the Arctic and expect to pull up an old Coke bottle — about 90 percent of the plastics are plankton-sized fragments, the result of slow degradation as the plastic floated north. That’s a bit higher than the percentage for the Pacific and Atlantic garbage patches, and quite a bit more than that of the garbage in the Mediterranean Sea, where the plastic travels shorter distances and so remains intact longer.

There’s no easy way to clean up all this plastic debris in the oceans, and it’s not like local conservation efforts by the Greenlanders and other Arctic inhabitants affected by the damage can do much. As the researchers point out, the only way to get any control over the amount of plastic in the Arctic is to reduce the amount of plastic waste at the source. The source, in this case, could well be the entire human population, albeit with a special emphasis on the wealthy nations of the North Atlantic that lie south of the affected Arctic waters.