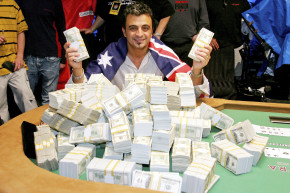 Gambling Is Fine Now, According To The NCAA
By Robert Silverman

Gambling Is Fine Now, According To The NCAA

Put that hypocrisy right in my veins, man

The NCAA appears to have enacted a major shift in policy, using the heavy critical fire its receiving for its return to North Carolina as cover for its acceptance of gambling.

On Tuesday, following the state passage of a fig leaf of a bill that did little to reverse discrimination against LGBTQ citizens in North Carolina, the NCAA caved, following the fine example set by the NBA. The NCAA granted the state 23 total championship events in Divisions I, II, and II, from 2017-18 through the 2021-22 season, including first and second-round Men’s Basketball Championship games in 2020 as well as regional games in the Women’s Basketball Championship in 2019.

Predictably, the bulk of the media and human rights organizations shot back. The Human Rights Campaign said in a statement: “By rewarding North Carolina with championship games, the NCAA has undermined its credibility and is sending a dangerous message to lawmakers across the country who are targeting LGBTQ people with discriminatory state legislation.”

The ACLU, which has been conducting a write-in campaign to hammer NCAA president Mark Emmert for this nakedly hypocriitcal act and has submitted a public records request to various cities in North Carolina to find out what—if anything—might be done to prevent discrimination, also chimed in. “When the NCAA originally withdrew events from North Carolina, they did so because they claimed to care about ‘fairness and inclusion’ for college athletes and fans. It’s a shame to see that those concerns have already fallen by the wayside,” James Esseks, director of the ACLU’s LGBT and HIV Project, said.

It’s pretty clear by now that NCAA doesn’t really have a vested interest in protecting basic human rights, and will flip-flop given the most meager excuse, but they seemed ready to hold firm on one societal ill. Namely, gambling.

As NorthJersey.com notes, the NCAA used to routinely host events in the Garden State, including the 2011 Final Four, but once the state moved to legalize sports gambling at casinos, the NCAA was gone. In 2012, they pulled six planned championship events in New Jersey, specifically citing the “integrity of the game” and “concerns for student-athlete well-being” as its reason for doing so.

“Maintaining the integrity of sports and protecting student-athlete well-being are at the bedrock of the NCAA’s mission, and are reflected in our policies prohibiting the hosting of our championships in states that provide for single game sports wagering,” Mark Lewis, NCAA executive vice president of championships and alliances, said in a statement. “Consistent with our policies and beliefs, the law in New Jersey requires that we no longer host championships in the state.”

Not until Tuesday, that is. Though the case, one in which the NCAA is a plaintiff, should make its way to the Supreme Court at some point this year, the NCAA decided that the time was right grant two Division III events to New Jersey.

Vocativ reached out to the NCAA to ask if gambling, whether legalized or not, now does align with their stated policies, what occurred in New Jersey to make this change possible, and/or if the NCAA thought they could just slip this through when no one was paying close attention. We will update this story if we receive a response.

UPDATE: Here is the NCAA’s response:

Well, that answers that.