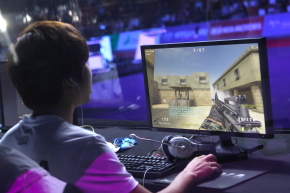 This Grocery Drives Itself To Your Door
By Ruby Nitzberg
Olympics

Get a gold medal for winning a FIFA 2017 match

Multi-sports events like the Olympics, Pan-American Games, and the Asian Games mostly consist of sports like swimming and skiing that athletes train for years and years. However, in the future, competitive participants will be able to snag a gold medal both for winning a soccer match in real life and for winning one online.

The Olympic Council of Asia (OCA) announced this week that eSports will become an official medal sport at the 2022 Asian Games in China, which is considered to be the second largest multi-sport event after the worldwide Olympic Games. About 10,000 athletes participated in the 2014 Games in South Korea.

OCA will partner with Alisports, the sports section of the China retailer Alibaba, to sponsor the event. The two organizations will first introduce esports as a demonstration sport at next year’s games in Indonesia. The competitive sport will then be fully included in the 2022 games in Hangzhou.

Those who participate in the games will be competing in three different video games including the soccer game FIFA 2017. The other two video game titles have not been disclosed, but they will be based on MOBA (Multiplayer Online Battle Arena) and RTA (Real Time Attack) gaming genres. So it might be games similar to “League of Legends” and “Star Craft,” respectively.

It might seem odd that video game competitions are now part of a multi-sporting event, but OCA said its decision was based on the “rapid development and popularity of this new form of sports participation among the youth.” Still, no purely physical athletic ability is involved—so it sets a strange precedent.

Competitive gaming has been extremely popular in the past couple years and has generated $493 million with a global audience of about 320 million people in 2016, according to market research firm Newzoo. Organizations like South-Korea’s International eSports Federation (IESF) and British government-backed International eGames Committee (IEGC) have long campaigned for the inclusion of esports in the Olympics.

Whether esports stars will ever compete at the full Olympics is still a decision that’s years away. Some might think it’s senseless to add video games to the Olympics, especially since it only requires sitting down and moving your thumbs — even if it is to “play” soccer. But then again, it wouldn’t be completely crazy to see more traditional competitive video game matches at the Olympics. Rifle shooting, skateboarding and climbing are all considered Olympic sports.