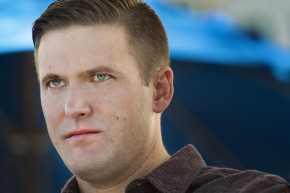 Richard Spencer, the de-facto leader of the white nationalist “alt-right” movement, can’t seem to go anywhere without sparking controversy and, in some cases, violence — as was the case Tuesday night at Auburn University, where Spencer gave an unwelcome lecture on white supremacy.

Three people were reportedly arrested outside of the venue where Spencer spoke as protestors and supporters clashed in the streets. Social media accounts of the chaos show violence erupting as police attempted to maintain order, and each side — those supporting the “alt-right” and those protesting Spencer, many of whom identify as anti-fascists (Antifa) —claiming “victory.”

“Antifa were outnumbered by the Alt-Right like 15 to 1,” Hunter Wallace, a high-profile member of the “alt-right” who runs a website called Occidental Dissent, posted on Twitter. “A bunch of snowflakes mostly women and betas were outside.”

Antifa were outnumbered by the Alt-Right like 15 to 1. A bunch of snowflakes mostly women and betas were outside

Oh ya know, just chasing some Neo-Nazis off my campus pic.twitter.com/2HXXelstXl

Spencer’s appearance at Auburn was not welcomed by the university, which canceled the event citing safety concerns. But on Tuesday, Spencer got a federal court order forcing the university to allow him to speak. Spencer called the court’s decision “a victory for the ‘alt-right'” and free speech in a video he posted on Twitter filmed outside the courthouse prior to the speech.

Spencer’s infamy spiked after he hosted a widely covered “alt-right” conference in Washington D.C. last November, at which he gave a speech about the future of the movement that concluded with several of those in attendance giving Nazi salutes as Spencer yelled “hail Trump, hail our people, hail victory!”

The speech — more specifically, the Nazi salutes — made national headlines. As Spencer’s profile grew, so did criticism of his movement; he became a target of antifa groups across the country, members of which have sucker-punched Spencer at least twice as he gave interviews to news outlets. Video footage of the punches went viral online, and raised the question of whether it’s “OK to punch a Nazi.”

Spencer’s family has become embroiled in the controversy surrounding him. A lawsuit was filed Tuesday against the publisher of a neo-Nazi website who encouraged his “troll army” to harass a woman in the small town of Whitefish, Montana. That woman found herself in the crosshairs after she urged Spencer’s mother to sell a rental property she owned in the town because of the negative attention brought by her son.

Despite the violence, Spencer called Tuesday’s event an “amazing victory” in a tweet posted after his speech.