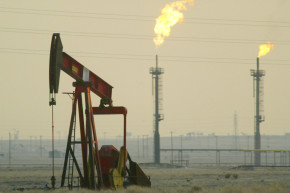 As oil prices have fallen, so too have education budgets

The 2009 recession precipitated an era of austerity in public education, with arts and athletics programs facing the steepest cuts, and a recent Forbes story shows that the U.S.’s most oil-dependent states are suffering sports slashing all over again.

A January S&P Global Ratings report noted that six of the country’s eight biggest oil producers—Alaska, Louisiana, New Mexico, North Dakota, Oklahoma, and Wyoming—were officially in another recession while the other two, Texas and Montana, had only marginal growth. Oil prices, which had been $99 per barrel in 2014, fell as low as $27 in 2016, before climbing back a little to above $50 currently. Coal production, too, reached its lowest point in since the early 1980s, affecting West Virginia and some of the big oil states.

As a result, headlines such as this one from the Albuquerque Journal are again becoming commonplace: “Middle school athletics cut from APS budget,” one story read, referring to the city’s public schools, for a savings of up to three-quarters of a million dollars. In Tulsa, similar scaling back of middle and high school sports is on the table. One school district in Wyoming is paring $1.6 million from its accounts, which includes indoor track, tennis, golf, and cheerleading.

The University of North Dakota shocked the sports world when it eliminated women’s ice hockey—a proud program that produced eight 2014 Olympians and, along with the men’s team, had played in a $104 million arena. The school has cut baseball and men’s and women’s swimming as well.

No one is arguing that athletics should have a central role in public education, but there’s no denying the positive effect they have on participants. Research done at Cornell in 2014 showed that student-athletes had “more self-confidence, self-respect and leadership” and “that people who played high school sports tend to get better jobs, with better pay, and that those benefits last a lifetime.” There are also proven benefits to one’s health and social well-being, not to mention a reduction in school dropout rates.

The youth in these areas are suffering the burden of reduced tax revenue from the declining prices of oil and coal, and while Donald Trump is seen as a pro-fossil-fuel president, the market isn’t likely to return to boom times in an age of climate accords and renewable resource technology. For the sake of the students in these states, hopefully there is some re-prioritizing of industries because the trickle-down economics at play are diminishing opportunities for students.