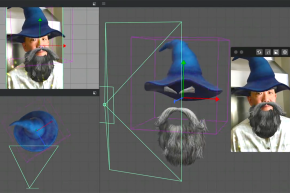 Mark Zuckerberg Wants To Change How We See Our Surroundings

At Facebook's annual developer's conference, the CEO's vision is a mixed reality

Facebook tries to impress the world with new technology each year at its F8 Developers conference, and this year, it was no different. CEO Mark Zuckerberg took the stage to announce new augmented and virtual reality features that aim to change how we interact with each other and our surroundings.

The company’s vision of the future is at once exciting and fun, but also sad and lonely: Imagine walking around with with a piece of glass in your eye conjuring up virtual objects. Will the tangible world lose some of its value and immediacy?

Zuckerberg began by showing off the Facebook camera’s new AR features, which unsurprisingly, are extremely similar to the World Lenses that Snapchat rolled out Tuesday morning. The Facebook app’s camera can now overlay text, designs, GIFS, information cards and memos on real life objects and places.

“We’re making the camera the first augmented reality platform,” Zuckerberg said. “Augmented reality is going to help us mix the digital and physical in all new ways and will make the physical better.”

Augmented reality — in general, not just with Facebook — is the ability to display information, add digital objects, and enhance existing objects within one’s physical surroundings.

The technology is still being developed, but Zuckerberg showed some examples of Facebook’s vision that were pretty impressive. He showed how you’d turn your house into the Hogwarts castle from Harry Potter, overlay turn-by-turn directions onto the streets of Rome, play GIFs in real-time, and even make fake flowers bloom on a real-life house plant.

The AR features in the app could be used by brands to add informational cards to their products. For example, you could go to a wine shop and scan the bottles to learn about its origin, reviews, and alcohol percentage. Facebook will also release a feature in which you can leave virtual notes for people in random places including meal recommendations at restaurants, fun suggestions at parks, and grocery reminders on the door of your refrigerator.

“It’s going to take a while to roll out some of these things out,” Zuckerberg said. “But over time I do think this is going to be an important technology that changes the way we use our phones.”

Zuckerberg said all this technology will eventually be transferred over to a physical device: a pair of glasses everyone “will want.” The company already has a concept of how the glasses will look, and they don’t seem to be dorky, rather quite ordinary.

Other features mentioned were the ability to create and observe art with the AR camera and play games, which Zuckerberg poked fun at by saying that in the future we’ll all be standing still staring at blank walls and space, but actually looking at virtual art.

Along with the advances in AR, the Facebook team also announced that social VR is finally here. The social network announced last year that it was working on a program for the Oculus Rift that would allow people to hang out in virtual spaces. The app was finally released today and it’s called Facebook Spaces, which is essentially a combination of Sims and Skype but in VR. You can even create your own “life-like” avatar that represents you.

As of now, Facebook is rolling out the AR features to developers in a closed beta and giving them the tools to create their own content for the app’s camera. Eventually, Facebook’s users will start seeing some of these products, but there’s no date set in stone other than over the next few months.