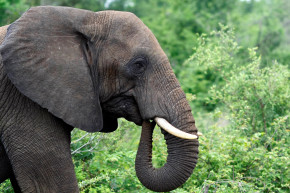 "Unless they are protected, we will lose them forever," World Wildlife Fund International's director general said

Illegal poaching, logging, and fishing of some of the most vulnerable species on Earth is being carried out in almost half of World Heritage sites, according to a new report by the World Wildlife Fund on Tuesday. Species listed by the Convention on International Trade in Endangered Species (CITES) are “illegally harvested” in 45 percent of these protected areas, of which there are more than 200 around the world.

“Natural World Heritage sites are among the most recognized natural sites for their universal value. Yet many are threatened by destructive industrial activities and our new report shows that their often unique animals and plants are also affected by overexploitation and trafficking,” Marco Lambertini, WWF International’s director general said in a statement. “Unless they are protected effectively, we will lose them forever.”

These World Heritage sites, including Serengeti National Park in Tanzania, Australia’s Great Barrier Reef, and the tropical rainforests on the Indonesian island of Sumatra, are the homes of the world’s rarest plants and animals. UNESCO-listed sites are the homes of almost a third of the planet’s remaining 3,890 tigers and 40 percent of all African elephants, as well as critically endangered species such as Javan rhinos in Indonesia and vaquitas in Mexico’s Gulf of California.

WWF’s wildlife policy manager, Colman O’Criodain, told Agence France-Presse that the vaquita, the world’s smallest porpoise, is most at risk of extinction.

Further, poaching of “vulnerable and endangered animal species,” such as elephants, rhinos, and tigers, happens in at least 42 World Heritage sites, while illegal logging of plant species such as rosewood and ebony occurs in 26 such sites. The illegal harvesting of species in these areas also chips away at potential social and economic benefits for their host countries, as over 90 percent of these World Heritage sites provide jobs and support the tourism industry.

Still, the black market is very lucrative as well. The illegal trade in wildlife is the fourth-largest illicit market in the world, after drugs, counterfeiting, and human trafficking. It is estimated to be worth at least $19 billion per year. The illegal timber trade, which contributes a huge proportion of deforestation in tropical countries, is worth up to $100 billion per year.

“This report provides a range of options to further enhance coordination between CITES and the World Heritage Convention, focused around World Heritage sites,” CITES Secretary-General John Scanlon said in a statement. “It is essential that CITES is fully implemented and that these irreplaceable sites are fully protected.”