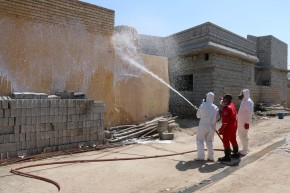 Even after a chemical attack wounds and kills hundreds of people, the remnants of toxic substances can harm anyone either returning to their home or investigating the attack. This is why the United States military is working a technology that can easily neutralize mustard agents, soman, and sarin.

Syrian president Bashar al-Assad’s latest attack earlier this month, which killed 80 and wounded hundreds, was not the first chemical strike on civilians. In May 2013, the Syrian government killed about 1,400 people in a Damascus suburb using rockets containing sarin.

Afterward, Syria handed over what it had claimed was its entire stockpile of chemical weapons and supplies. The attack-ready weapons were then destroyed on the U.S. Navy ship MV Cape Ray as the vessel floated in the Mediterranean Sea.The neutralization processes, done by hydrolysis, requires massive amounts of water and produces liquid waste that still needs to be processed and disposed of. If something had gone wrong during the long and expensive “demilitarization” process of nearly 600 metric tons of chemicals, an ecological nightmare would have unfolded.

Months after that arduous but successful project, the U.S. Department of Defense decided it needed a better way to handle chemical weapons, and DARPA, the military’s research arm, started taking solicitations for their “Agnostic Compact Demilitarization of Chemical Agents (ACDC)” program dedicated to finding a way to convert chemical war agents to inert material.

In December 2015, the agency awarded contracts to Southwest Research Institute and SRI International to develop prototypes of a portable system that could dispose hazardous chemicals. Such a system would allow crews to safely and easily demilitarize chemicals without having to move them across the world to special facilities.

“The desired outcome from the neutralization process is environmentally safe material — fertilized soil. Most toxins are produced from safe natural materials in the first place, so we want to put them back into their original harmless state,” said DARPA program manager Tyler McQuade, in a statement, at the time.

Last Friday, DARPA announced that the technique developed by the Southwest Research Institute had successfully completed tests in which it eradicated deadly chemicals without using water or producing hazardous waste. The system first uses a plasma torch to convert the chemicals into harmless components, then uses a soil scrubber to eradicates the remaining contaminated traces. The test results were independently validated and verified by two other labs.

The technology, if successfully brought into use, would bring the world a giant step closer to fulfilling the the 20-year-old international treaty banning the stockpiling, production, and use of chemical weapons.