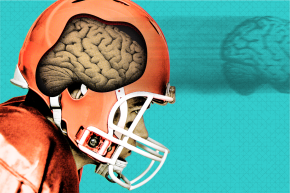 NFL Players Fight Back Against Their Own Concussion Lawyers

In the months since the NFL settled a billion-dollar class-action concussion lawsuit with over 20,000 former players, a new battlefront has emerged: plaintiffs fighting to keep what still amounts to a minimal payoff from ending up in the pockets of their lawyers.

As Outside the Lines reported in March, two dozen spouses wrote a letter to the presiding judge, Anita Brody, out of concern over the legal fees that are now being demanded by the various attorneys above and beyond the $112.5 million fund that was created as part of the settlement agreement. In the letter, they explain that additional compensation in the form of retainer fees ranging between 15-40 percent of a player’s award would represent a potentially devastating hardship. (In the settlement, players will receive between $300,000 and $5 million, depending on age and the severity of the traumatic brain injury incurred while playing football.)

Jason Luckasevic, the attorney for five hundred of the plaintiffs, told Outside the Lines, “This case has done nothing but show lawyers at their worst,” specifically pointing a finger at lawyers who have latched on to the case long after it was originally filed in 2011 and the attempts to poach clients by lawyers promising lower fees and higher awards. Another lawyer, speaking anonymously, went so far as to describe the current climate as “a feeding frenzy right now. It’s dirty out there, and I don’t like it. I have to shower twice a day.”

The Dallas News spoke with two former players who are fighting back against their attorneys’ financial demands. George Andrie, now 76, played for the Dallas Cowboys for 11 years and retired in 1972. He suffers from dementia and aphasia, experiences frequent memory loss, experiences seizures and bouts of depression, and is prone to bursts of unexpected rage. He is eligible for up to $158,000, which, according to his daughter, Mary Brooks, is just enough to pay for 24-hour care for both Andrie and his wife, Mary Lou, who is confined to a wheelchair, for two years. The family is also dealing with attorneys who may have taken advantage of Andrie.

She says she was surprised to learn recently that, back in 2012, her parents had signed up with lawyers who represent 1,400 players. Her father didn’t remember it and her mother didn’t understand what they were signing, they say.

The Dallas News spoke with Andrie’s lawyers. One declined to comment and the other said he would not be asking for any additional fees.

For Rickey Dixon, age 51, a defensive back with the Cincinnati Bengals and the Pittsburgh Steelers who was diagnosed with Amyotrophic Lateral Sclerosis in 2011, the situation is far worse. He too requires a wheelchair, his body withered to the point of near-paralysis such that he’s lost the ability to speak, and weighs only 115 pounds. Dixon is set to receive $4.5 million in the settlement, but his attorney, Charles Zimmerman, wants 20 percent. According to Zimmerman, the $900,000 is “more than justifiable,” and is less money than he and the Dixon family agreed to when he was initially hired in 2012. The Dixons disagree.

The $4.5 million represents not only a just compensation for Dixon and his family, but a necessity, given the constant medical attention he will require for the rest of his life, as well as the needs of his 20-year-old son, who is also disabled. “For us, this is not buying a big house and a new car; It’s just survival,” his wife Lorraine said. Lorraine Dixon also questioned how Zimmerman arrived at the figure he did.

The Dixons contend in a court filing that he has done too little work to justify a cut of their reward. They included an invoice from his law firm that totals just over $2,300 (though it includes only expenses like copying and postage, not his hourly fees).

“I don’t mind paying lawyers,” says Lorraine, who is herself a lawyer for the Environmental Protection Agency in Dallas. “I respect the craft, their expertise. But don’t try to milk us for things you didn’t do.”

Her conversation with the Dallas News also includes details of the intense amounts of efforts her husband had to make in order to communicate the details of his case:

Over the course of two weeks, morning to night, he wrote a letter to the judge using a special computer that tracks his eye movements to pick out letters. When his eyes grew sore, his wife soothed them with a warm wash cloth. When that wasn’t enough, he switched to texting, painstakingly tapping a cell phone with his knuckles.

According to the Dallas News, Judge Brody is expected to hold a hearing over the disputed fees within a matter of weeks.