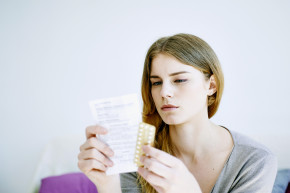 Birth control pills may have done some very good stuff — oh, you know, ushering in the sexual revolution and giving women unprecedented control over their reproductive lives. But massive social progress aside, a new study warns that a popular oral contraceptive is actually linked with a decrease in women’s overall “well-being.”

The study, published in the journal Fertility and Sterility, followed 340 women between the ages of 18 and 35 over the course of three months. They were randomly assigned to either placebo pills or hormonal contraception containing ethinylestradiol and levonorgestrel, the most common form of combined birth control in Sweden, where the study took place. The researchers found that women who took the birth control pills reported overall a lower “quality of life,” as a press release puts it. They specifically scored lower — based on self-reports — on measures of well-being, self control, and vitality.

“This might in some cases be a contributing cause of low compliance and irregular use of contraceptive pills,” explained co-author Niklas Zethraeus of Sweden’s Karolinska Institutet. “This possible degradation of quality of life should be paid attention to and taken into account in conjunction with prescribing of contraceptive pills and when choosing a method of contraception.”

Interestingly, the study found no increase in symptoms of depression among the women taking the birth control. Past research has linked some forms of birth control with depression, although the findings are complicated and the most reliably study yet found a very small associated increased risk. These current findings suggest that this particular method of birth control isn’t associated with depression, but is linked to other negative emotional side-effects. The researchers caution, though, that the effect was small — and it’s important to remember that only one method of contraception was studied, so the results cannot be applied more broadly.

Of course, a study focusing on birth control’s negative impact on women’s well-being can feel massively out of touch with recent human history. But it’s also the privilege afforded by birth control that allows us to consider the everyday impact of various hormonal contraceptives — and the possibility that women still deserve better.