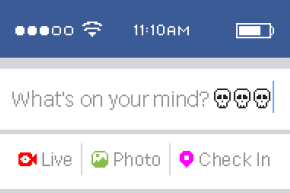 The Rise Of The Social Media Killer
By Allee Manning

The Rise Of The Social Media Killer

For narcissistic killers, these platforms present a unique opportunity to control the narrative

This week, the nation tuned in as hundreds of news outlets reported that an Ohio man was still on the loose after killing an elderly stranger named Robert Godwin Sr. and posting the footage on Facebook on Monday. Steven Stephens, the killer who quickly became the subject of a nationwide manhunt, was found dead in an apparent suicide on Tuesday, but only after becoming the ringleader of a media circus he had orchestrated.

In his infamy, Stephens is not alone by any stretch, following in the footsteps of many others. Older technologies and even newspapers have been used by killers to promote their acts. Now, the phenomenon of “social media killings” is slowly becoming more frequent — especially as these platforms introduce new ways for users to engage their followers or the public in real-time, or close to it.

We saw it in 2015, when a Virginia man gunned down two former coworkers as they filmed a live broadcast and immediately posted the footage to his Twitter and Facebook pages. Similarly, another Virginia-based murderer who killed her father-in-law months earlier gained notoriety when she posted a selfie with the bloody knife. These stories, like Stephens’, were covered widely, with special detail paid to the horror that unfolded before virtual “witnesses” on their screens. Going even further back, an 18-year-old “MySpace killer” made headlines after she confessed on the social media site: “I just fucking killed someone,” describing it as being “pretty enjoyable.”

According to experts of criminology and psychology, the new avenues that social media sites are offering to help us share our lives at the touch of a button are especially appealing to killers who are narcissistic. What they find in something like Facebook Live is a guaranteed captive audience that gives validation to performative killings. The shock and horror that ensues (and is inevitably reported on) may even be a primary source of motivation for some as they seek to control their identity.

“The primary goal of recent killers who have used social media outlets seems to be… as a means to reinvent themselves from someone who is powerless, emasculated, or a failure into someone who is powerful, masculine, tough, and ruthless,” said criminology professor Mary Reiter said in an e-mail. She noted that Elliot Rodgers, who killed six people as part of his crusade against women, and Seung-Hui Cho, the Virginia Tech mass murderer, indicated this in their YouTube confessions.

Elizabeth Yardley, director of the Centre for Applied Criminology at Birmingham City University in England, has studied “Facebook killers” in detail, and adds that narcissism often plays a large role in their ethos.

“They have committed the most serious of moral and legal transgressions and this, they believe, assigns them a special status,” she told Vocativ in an e-mail. “Narcissistic killers will always find a way to try and control the narrative, with or without social media.”

“I worry that we live in a context in which for some people, violence becomes a tool for achieving status and power,” Yardley added.

While Mark Zuckerberg said on Tuesday that “we’ll keep doing all we can to prevent tragedies like these from happening,” he had little to offer in terms of concrete solutions. Because, really, what can be done?

Though Facebook has recently announced its intention to use artificial intelligence to analyze identify posts that recognize disturbing content (such as rapes, suicides, and other deaths) and remove content from the site even before tragedies occur on live streams, the high-tech approach is ambitious and flawed. Additionally, blanket censorship of such videos could prove a detriment in some cases, as livestreamed footage in the aftermath has also proven important in documenting cases of police violence and abuse.

Even advocates of making it a crime to show killings on Facebook acknowledge that this likely would not prevent the problem. That said, such a law could help stop the recirculation of these videos once they are removed. After the video of Stephens killing Godwin was taken off Facebook after two hours, recordings of the footage continued to amass views. One version was played 1.6 million times, according to Cleveland.com.

The reality is that social media killings are only going to become more common, experts believe, especially considering the viral nature of Godwin’s death and the well-known phenomenon of copycat killings.

Sociologist Zeynep Tufekci wrote that the American media should do a better job avoiding sensationalization in reporting on murders of this nature in a 2012 Atlantic article, specifically focusing on mass murderers. Some news outlets and criminologists now refrain from publishing the names of those who commit mass murders today. (In her own personal blog post about this weeks’ killing, Yardley refused to name Stephens, instead giving his initials.) But social media, which is centered around the idea of a platform available to all, allows killers to bypass these measures.

“In the social media age, [killers] are not dependent upon these gatekeepers — who may well choose not to publish their stories,” Yardley said. “They can go straight to their ‘audience’.”

More DARK NET: When Looking At Graphic Images Is Part Of The Job

Neither are there concrete standards for how reporters should cover these killings and handle graphic material once it’s already online. Andrew Seaman, ethics chair for the Society of Professional Journalists, said the news media has a delicate line to toe when covering social media killings and other crimes, and should follow the organizations ethics code.

“Journalists need to be able to report what’s happening, who did things, because one of the benefits of journalism is that it’s sort of like an antiseptic to society,” he told Vocativ. “You tell people what happened so they’re not left with questions, they’re not worried. The goal should be responsible coverage.” That said, he said that outright refraining to name suspects in situations like these were a bit “extreme.”

Two things Seaman took issue with in the media fallout Sunday and Monday were the way some news outlets aggregated the footage and others used graphic stills from the footage Stephens filmed. He also noted that all social media companies could have better worked to ensure Stephens’ video was not widely recirculated, and certainly not autoplayed on their platforms. The proliferation of images of Godwin in his final seconds of life, shot from the perspective of Stephens, used for articles also struck Seaman as unnecessary. Still, he feels that making the sharing of footage from such videos illegal altogether is too much — highlighting just how delicate this balance is.