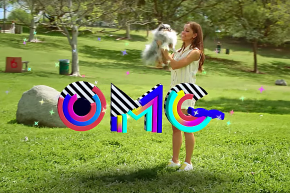 Snapchat Is Diving Into Augmented Reality With World Lenses

OMG, you can now play with 3-D graphics in your photos as if they were really there

If you ditched Snapchat for Instagram’s similar Stories feature, you might want to revisit the app that started it all. The ephemeral photo app rolled out a new feature you won’t be able to stop playing with.

Snapchat’s unveiled new World Lenses on Tuesday that allow users to overlay captions, graphics, and even Bitmoji’s to their surroundings using augmented reality. Unlike stickers, the new world lenses appear as 3-D graphics that can be adjusted to appear over surfaces as if they were really there. Think, Pokémon Go, but without Pikachu.

The World Lenses currently feature overlay text graphics including “OMG,” “Hello,” “Cute” and “Gross.” It also has cute animated graphics such as a happy rainbow, a crying cloud and a popsicle that blows kisses.

World Lenses can be accessed the same way you’d get to Snapchat’s selfie lenses. You just just tap on the screen and the lenses will appear in small bubbles across the bottom of the screen. However, the Text Lenses are only available in certain areas for now. Snapchat said the feature will eventually expand globally.

More Augmented And Virtual Reality Might Be Everywhere In 2017

Snap’s new feature confirms that the company is, in fact, going into AR, the technology that puts digital objects into a real-world view. Though the announcement blog doesn’t use the technical term, instead it says, “paint the world around you with new 3D experiences.” It was reported late last year that Snap Inc. acquired an Israeli AR tech company called Cimagine. It was also rumored that Snap’s Spectacles would make a comeback with AR features, but that’s not been confirmed.

World Lenses are a fun way to show that Snapchat has not been killed by Instagram Stories, even though they have the same amount of viewership, but it’ll be interesting to see if Facebook is working on a similar feature.