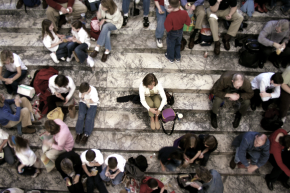 The United States Of Distressed America
By Ed Cara

The United States Of Distressed America

Millions of Americans — enough to fill up the entirety of New York City and outnumber most states’ populations — are struggling with a bottomless sense of despair, worthlessness, and exhaustion, according to a new study published on Monday in Psychiatric Services. But their ability to get needed mental health care has only gotten worse over the last ten years, even with the passing of the Affordable Care Act.

Researchers pored through data from the National Health Interview Survey, a nationally representative, extensive canvass of Americans’ lifestyle habits, looking at the years 2006 to 2014. They estimated that, as of 2014, 8.3 million Americans, or 3.4% of the total U.S. population, were suffering from serious psychological distress, the catch-all term for mental health ills that are serious enough to affect someone’s physical well-being. In 2006, that same figure hovered around 3 percent.

Moreover, they found that 9.5 percent of these Americans lacked the health insurance needed to afford therapy or psychiatric care in 2014, a slight uptick from the 9 percent recorded in 2006. And a similar trend was seen with people who said they faced delays in getting treatment because of their lackluster mental health coverage.

“Although our analysis does not give concrete reasons why mental health services are diminishing, it could be from shortages in professional help, increased costs of care not covered by insurance, the great recession, and other reasons worthy of further investigation,” said lead author Judith Weissman, a research manager at New York University’s Langone Medical Center, in a statement.

After adjusting for insurance status and other factors, Weissman’s team found key differences between people with severe distress and those without. They were much less likely to be able to afford medication or health care and more likely to be unemployed. Despite these disparities, they were also more likely to visit a doctor ten or more times within a year, reflecting their overall poorer health.

Over the years, there were also shifts in who felt mentally overwhelmed. Reaffirming other research, Weismann also found that middle-aged adults emerged as a new group at risk of suicide and mental illness in the wake of the great recession.

“Based on our data, we estimate that millions of Americans have a level of emotional functioning that leads to lower quality of life and life expectancy,” says Weissman. “Our study may also help explain why the U.S. suicide rate is up to 43,000 people each year.”

The ACA, along with the earlier Mental Health Parity Act passed in 2008, did improve people’s ability to access mental health care, compared to previous years before their implementation. But the numerous benefits the ACA has provided to many Americans simply haven’t been felt as strongly for those dealing with mental distress. Given that the Trump administration hasn’t entirely relented in trying to strip away the core tenets of the ACA following its failed attempt to craft a replacement, it’s certainly possible that even these meager gains may fade in the years to come.